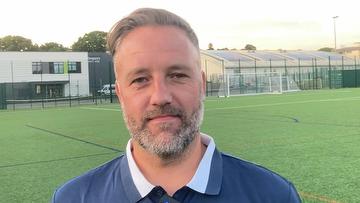 "This is when the real stuff starts."

89 days after being appointed manager Jay Saunders takes charge of his first competitive Tonbridge game on Saturday at Weymouth, a side relegated from the National League last season.

Jay and the new look Angels squad are as excited as the many travelling fans to finally get the season under way, with not just Jay, but several new signings preparing to make their debuts for the club.

Jay said:  "I'm very excited.  This is when the real stuff starts.  It's been brilliant but I can't wait for the league to start and then get to the home ground.  I can't wait to train here and play here and see the supporters.  It was great to meet some of the supporters on Sunday and the good following, and to see how much everyone's looking forward to it.  It seems like it's really starting now.

"Weymouth have had a large turnover of players, they've got a good manager (David Oldfield) who I know from his Oxford days so they're a big club, I expect a big crowd, but similar to us, they've had a large turnover of players.  They're going to be finding their feet a little bit but we've done our research, it'll be a tough day but it's one we're looking forward to.

Two of our first three games are against teams relegated from the National League, and we asked Jay whether it was a good time to play a team who have just come down.

He said:  "I'm one of those who says you've got to play everyone so that's not something I think about .  Whoever we play we do our homework, and will prepare as best we can. Would it have been harder going there in December?  Who knows.  It's down to our players to go and do a job.

With a number of new signings, and competition for places, does Jay know his starting line up?

"I'm almost there.  Bar one or two I'm there.  Ben Swift is touch and go at this stage, but pretty much everyone else should be available.  We've trained well this week but hopefully we go there with pretty much a full squad.  I'll watch more footage on Weymouth and will make a decision then.

"The boys really appreciate the away support so hopefully we can make it worthwhile and we'll see you after the game."

Details on directions to and admission prices at Weymouth FC are available by clicking  here.