Vote: Match of the Decade 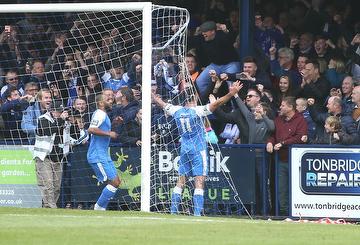 It's been an eventful decade here at Longmead. Two promotions and one relegation, two long-serving managers, and 1,567 goals (and counting!) in the 500-odd matches played. We're going to give you the opportunity to relive some of those memories, we've shortlisted 26 of our favourite games - one for every letter of the alphabet - and we're asking you, the fans, to rank your favourites from 1st to 10th.

The definitive top ten will be published, in reverse order, in the match programme and here at tonbridgeangels.co.uk starting with the Chippenham Town match on January 4th.

Below you'll see a guide to the shortlisted games - with access to highlights where available - then click on the link below to rank your ten favourites.

A: Tonbridge Angels 3 Harrow Borough 2 – 15 April 2010
https://www.youtube.com/watch?v=E5AgunZErsE
After going 12 unbeaten to move from 18th to 6th and on the verge of an unlikely play off place, Angels fall behind 0-2 but turn things round through Jamie Cade (2) and Scott Kinch to win 3-2.

B: Tonbridge Angels 7 AFC Hornchurch 1 – 2 October 2010
http://www.youtu.be/7lJYdBRuZnM
A shocking start to the season is put behind Tommy Warrilow’s players as a rejuvenated side featuring four new signings put seven past the Essex side – our first ever win over the Urchins

D: Tonbridge Angels 1 Maidstone United 0 – 12 March 2011
http://www.youtu.be/7x4MtYRiwYE
A low-scoring affair decided by a trademark goal from Carl Rook, but this match is most famous for the atmosphere off the pitch as documented in this blog

E: Tonbridge Angels 3 Harrow Borough 2 – 3 May 2011
http://www.youtu.be/aNW2d9scBlU
Chris Piper and Scott Kinch put the Angels in control early in this play-off semi final, but the visitors rally to force extra time. Ade Olorunda is the hero with a 111th minute winner.

G: Tonbridge Angels 5 Eastbourne Borough 1 – 21 January 2012
no highlights found
Nothing epitomised Frannie Collin’s role in our first Conference South season more than this match, which saw the striker score four on his way to picking up the league’s Golden Boot.

H: Staines Town 1 Tonbridge Angels 4 – 3 November 2012
no highlights found
A rare highlight in a drab second Conference South season with Tom Davis, Frannie Collin (2) and Lee Browning all scoring in the second half to craft a dominant win at Wheatsheaf Park.

I: Eastleigh 1 Tonbridge Angels 2 – 23 November 2013
https://www.youtube.com/watch?v=q1uaSmcTXX0
Few would have given us a hope at the favourites and eventual champions, and even less would do so when Ijaha saw red in the first minute of the match – but somehow a 2-1 win was conjured up out of nowhere. Sonny Miles was the 88th minute hero

J: Tonbridge Angels 1 Weston-super-Mare 0 – 15 March 2014
https://www.youtube.com/watch?v=VqVBl4d9X7A
We were staring relegation in the face, but this match gave us a glimmer of hope. Alex Teniola was the debutant off the bench, bundling in an 89th minute winner to steal all three points.

K: Tonbridge Angels 1 Maidstone United 0 – 25 August 2014
http://youtu.be/TMJ0ivQhxN4
Another late winner for Teniola, this time in front of an 1100+ crowd against our fiercest rivals.

L: Maidstone United 1 Tonbridge Angels 1 – 1 January 2015
https://www.youtube.com/watch?v=Q3LEfEf9NrU
With apologies to Sonny, we couldn’t fail to include the return fixture as well, with a late Miles own goal securing a crucial point for the Angels.

M: Bognor Regis Town 0 Tonbridge Angels 5 – 22 August 2015
no highlights found
A phenomenal first half performance on a beautiful summer’s afternoon by the seaside, and local boy done good, Luke Blewden scoring three of them. What more could you want?

N: Kingstonian 1 Tonbridge Angels 3 – 20 February 2016
no highlights found
Particularly memorable for the away fans who had created a party atmosphere for the entire game and were rewarded for three late goals from Nathan Elder, Tommy Whitnell and Nick Wheeler to secure victory.

O: Tonbridge Angels 4 Wingate & Finchley 3 – 12 March 2016
https://www.youtube.com/watch?v=aCqvwXEieLY
The greatest comeback Longmead's ever seen? Dead and buried at 0-3 down, Jerome Sobers (2) and Nathan Elder (2) completed an incomprehensible victory that will be remembered for many years.

P: Tonbridge Angels 4 Hereford 2 – 1 October 2016
https://www.youtube.com/watch?v=nmB8ldxoqJ8
A rare appearance of an FA Cup game on this shortlist! Angels raced out of the blocks with a free kick from Luke Allen and Nick Wheeler giving them a good lead after less than 10 minutes. Craig Dundas and Luke Blewden put the match out of sight in the second half to put us into the 4th Qualifying Round.

S: Tonbridge Angels 2 Leiston 1 – 17 October 2017
https://www.youtube.com/watch?v=_IlM2O0AAew
One of the highlights in a season of inconsistency, an excellent performance against then top of the table Leiston side. Alex Akrofi and Nathan Elder scored the goals.

T: Tonbridge Angels 5 Needham Market 4 – 18 November 2017
https://www.youtube.com/watch?v=rKgwtHDe9oM
A mad game – Joe Turner’s spot kick put us ahead, the Suffolk side responded twice to go in front, then Nathan Elder levelled before half time. Alex Akrofi and Elder extended the lead for 4-2, only for the score to pull back to 4-4. Then Tashi-Jay Kwayie’s curled effort deflected in for an injury time winner. Scenes!

U: Tonbridge Angels 2 Billericay Town 1 – 22 March 2018
https://www.youtube.com/watch?v=hHERmJE4UPo
You know the score, this was peak Tamplin era and following the League Cup humiliation, we owed them one. Billy Bricknell had them in front, but late goals from Joe Turner and Nathan Elder sparked pandemonium around the ground.

V: Tonbridge Angels 1 Haringey Borough 0 – 26 January 2019
https://www.tonbridgeangels.co.uk/match/2018-2019/isthmian-football-league-premier-division/tonbridge-angels/haringey-borough/112360/highlights
The Brightlingsea draw a couple of weeks previous may have sparked the revival, but it was this result that proved we meant business. Adem Ramadan scored a stunning goal to steal the points, but this only turned out to be a starter course… more on him shortly.

W: Haringey Borough 1 Tonbridge Angels 2 – 2 May 2019
https://www.tonbridgeangels.co.uk/match/2018-2019/isthmian-football-league-premier-division/haringey-borough/tonbridge-angels/125370/highlights
They’re still having nightmares about him aren’t they? Ramadan came back to haunt Haringey once again, putting the ball on a postage stamp to put us in front. Chinedu McKenzie doubled the lead, then it was backs to the wall to secure a place in Final #1.

X: Tonbridge Angels 2 Merstham 0 – 6 May 2019
https://www.tonbridgeangels.co.uk/match/2018-2019/isthmian-football-league-premier-division/tonbridge-angels/merstham/125408/highlights
A routine win in reality and with a second final to be played, even the celebrations were something of an anti-climax. But the game was of huge importance and was not without its drama, with Sonny Miles and his opposite number Ollie Cook both seeing red.

Y: Metropolitan Police 2 Tonbridge Angels 3 – 11 May 2019
https://www.tonbridgeangels.co.uk/match/2018-2019/premier-division-promotion/metropolitan-police/tonbridge-angels/125468/highlights
The first, and last, Super Play Off Final. (We won it one time). Behind twice, but some individual magic from D’Sean Theobalds kept us in it for another half hour’s play, and once Tom Derry had headed in Jared Small’s perfect cross, there was no looking back.

Z: Tonbridge Angels 3 Billericay Town 2 – 7 December 2019
https://www.tonbridgeangels.co.uk/match/2019-2020/national-league-south/tonbridge-angels/billericay-town/143203/highlights
It’s fitting to end this list on another famous comeback and another 3-2 win, and who knows, with a few more games remaining of the year there may be time for more magic moments this decade.