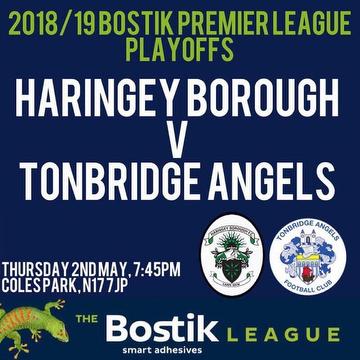 Tonbridge travel to Tottenham for a crunch clash in a premier league on Thursday evening (May 2).

Sorry, that attempted joke was first used a few months ago, just ahead of an Isthmian top-flight tussle at Longmead.

This time, the crucial Bostik match involving Haringey Borough FC is even more vital – it is a one-game, play-off semi-final, in North London. The hosts play in the district best known as the home of Hotspurs. (‘Spurs’ had a slightly important contest during the week as well!)

The eventual winners subsequently face a final, then a win-or-bust contest against a club from another organization, probably the Southern League. After the trio of tough tests, the triumphant team earns a place in the National South for 2019/20. Obviously, discussions regarding such matters are superfluous at the moment – at least until the conclusion of the Thursday evening tie.

The extra hurdle is only for the current campaign, as part of the recent shake-up of the middle ranks of semi-professional football. Normal service is expected to resume in future.

Haringey and Tonbridge finished third and fourth, respectively, in the Bostik Premier, which means the pair go head-to-head for the opening phase of the play-offs. The other ‘semi’ involves Carshalton Athletic (second) and Merstham (fifth). The latter leap-frogged Worthing, an outfit that seemed on course for at least one extra game until the closing few fixtures.

The Angels guaranteed a place in the top five following a 1-0 win over Carshalton on Easter Bank Holiday Monday, taking their tally to 70 points. Indeed, Steve McKimm’s men could have secured the second spot, if they had managed to win the last fixture of the normal season. However, a narrow defeat (by 2-1) at Potters Bar on Saturday (April 27) means the word superfluous can be used again!

Runners-up aspirations in the Bostik set-up came unstuck on a bobbly pitch, in windy conditions. Familiarity with the environment, arguably, suited the Hertfordshire hosts on the day.

So, Steve McKimm’s charges might be looking forward to playing on an artificial surface on a spring evening. That said, the previous visit, last autumn, was not an enjoyable experience – the North Londoners inflicted 4-0 misery. The home side proved ruthless in front of goal that night (November 12).

In West Kent, making the play-offs is an achievement in itself, especially when perusing league tables published near the end of 2018.

Perhaps a brief summary of earlier events might be useful for the many newcomers boosting the crowds and coffers during the past few months.

A dismal spell meant the men from Longmead were languishing in mid table, until a run of victories, partly inspired by a couple of new recruits for the forward department, rekindled promotion dreams.

One of the fresh faces, signed around the turn of the new year, is a former Haringey performer. Chinedu McKenzie soon became a fans’ favourite and the exciting striker is noted for playing with a “smile on his face”. There will be smiles all-round for the journey back, if ‘Chin’ manages to grab the winner.

Another positive story involves another attacker added to the ranks. A group of supporters helped fund the acquisition of Tom Derry and the arrival of the striker from Leatherhead also coincided with the miraculous change of fortunes.

One of the telling performances during the superb run was a vital 1-0 success over the-then league leaders, Haringey.

The Borough are relishing the most successful period in their history, which, under the current organization, goes back to 1973. The club formed after Haringey/Wood Green merged with Edmonton. The former had at one stage been called Wood Green Town, playing at Coles Park since 1930.

Initially, the amalgamated outfit competed in the Athenian League and changed to the current name in the mid-1970s. Since then, reshuffles of the semi-professional pack led to membership of various divisions, such as the lower echelons of the Isthmian, plus the Spartan, South Midlands and Essex entities.

It was in the latter that Haringey achieved the first significant success, clinching the Senior title in 2014/15. The triumph paved the way for a place in the Isthmian North. A couple of years later the squad finished fifth, before going one better at the end of 2017/18. Borough beat Heybridge Swifts 2-0 in the semi-finals and then defeated Canvey Island by 3-1 in the final.

The debut in the Bostik Premier has proved extremely successful so far. It included an eye-catching FA Cup run which boosted the finances, courtesy of a First Round proper appearance, involving high-profile television coverage.

For Haringey, a tie involving a name once associated with giant-killing, such as a stunning success over mighty Liverpool in a memorable final, ended in disappointment. Wimbledon, albeit the AFC version, avoided a potential slip-up and progressed to the next round after a narrow 1-0 win.

At Coles Park, the outcome would not have lingered in the memory for long, especially when minds could focus on a promotion bid. The North Londoners, like Tonbridge, topped the table at times but, obviously, now require the play-off route for possible progression to National South.

Recently, the Angels lost 0-1 at Leatherhead (April 6), at home to runaway-champions, Dorking Wanderers (0-2, on April 13) and at Potters Bar (as mentioned earlier). A useful draw at Worthing (1-1) and excellent win over Carshalton (as also mentioned) provide encouragement. The former put pressure on the Rebels and in the end they missed the cut, eventually finishing ninth.

For Haringey, the closing three matches concluded in losses, at the hands of Dorking (by 0-2, away on April 27), Wingate (1-2, at home on Easter Bank Holiday Monday), plus a drubbing at Folkestone (0-4 on April 20).

The latest victory was a 2-0 success over Kingstonian, at home, on April 13.

It is best not to read too much into poor results before a one-off contest - especially a win-or-bust clash on an opponent’s soil.

The Bostik Premier Play-off Semi-final between Haringey Borough and Tonbridge Angels on Thursday May 2 is a 7.45pm kick-off.

For further details please see other match information elsewhere on this website.