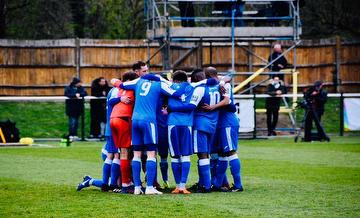 No way through the Grove for Angels

Angels run of four straight league wins was brought to a halt by an organised Leatherhead team who on the day all did their jobs just a little bit better than their visitors. The game was never a classic with few flowing moves but the hosts produced genuine moments of pressure that Angels couldn’t really match and in the event suffered their first double defeat of the season.

The Tonbridge strikers were continually thwarted by the Tanners central defenders who both had excellent games and apart from plucking a few crosses out of the air, Tanners keeper Zaki Oualah had a fairly quiet afternoon in contrast to Angels Jonny Henly who was required to make two or three top class saves.

Much of the first half was played in the middle of the park with the ball spending a lot of time in the air as hasty clearances failed to find a teammate and were simply headed away by a central defender. Forwards found it difficult to make the ball hold up and so far as the Angels were concerned it begs the question whether Alex Reid should have started or been introduced earlier. There were half chances for the visitors with Joe Turner on six minutes and Adem Ramadan on 17 minutes while on 10 minutes Tanners’ Charlie Hester-Cook might have done better with his effort from 18 yards out.

The game at last came to life in the 39th minute when an attack down the left for Leatherhead which got round the back of the Angels defence began a sequence of events which saw the ball hit the Tonbridge bar, Henly with two punched saves and a couple of blocks on the line and somehow the game remaining goalless.

For the remainder of the half Leatherhead had the upper hand with a couple of further decent chances and Tonbridge probably were relieved to reach the sanctuary of the dressing room for the break.

The second half continued in much the same vein with Leatherhead perhaps taking a firmer grip on proceedings but without creating too many genuine chances. Early in the second half Jared Small for the visitors twice managed to escape his marker and produce a couple of dangerous crosses but the Angels were unable to capitalise.

On 69 minutes Leatherhead had another high tempo moment when a goal looked inevitable but somehow the Angels defence managed to just about clear their lines. The reprieve was only to last three minutes. A free kick for the Tanners just outside the penalty area was only half cleared, the hosts took over with Dan Gallagher getting the final touch and that was to prove the crucial strike. There were appeals from the blue shirts that there was a handball in the build up and perhaps even an offside but after seemingly checking with his assistant the referee confirmed the goal would stand.

The Angels huffed and puffed for the remainder of the game but somehow they just didn’t look convincing. There were a few worrying moments for the hosts as they were forced to face free kicks in the final third but these lacked accuracy and the final whistle blew with the home supporters celebrating with their team as they saw their chances of making the top five markedly increase.

As for the Angels they continue to lie in third place with at least some other results around them going their way and with everything still to play for as they dust themselves down and prepare for the visit of newly crowned champions Dorking Wanderers.