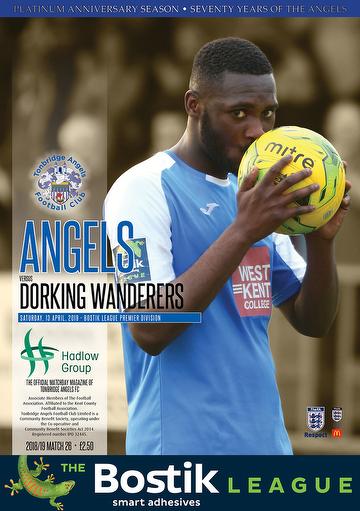 Angels vs Dorking Wanderers: The game you can’t afford to miss

Tonbridge take on the champions and runaway leaders on Saturday in a mouth-watering clash, as the promotion race hots up.

The Angels are third in the Bostik Premier and in an excellent position for securing a place in the play-offs. Please!

The Longmead hierarchy hope supporters turn up in force and provide the extra backing needed to get the club over the line. Attendances have rocketed by 20 per cent this term and fingers are crossed for 800-plus as the West Kent side face the table-toppers.

More than 630 witnessed the most recent home contest, a 3-1 victory over Harlow a couple of weeks ago.

The Wanderers were crowned champs last weekend, after second-placed Haringey failed to beat Hornchurch. The Urchins’ last-gasp leveller (finished 2-2) ensured the trophy headed to the foothills of the North Downs, rather than the concrete surrounds of North London.

Although the next guests have nothing to play for, in theory, they will be aiming to avenge defeat inflicted by Steve McKimm’s men earlier in the season. A late goal from Sonny Miles snatched maximum spoils near the end of the tussle in Surrey.

The weekend clash against Dorking provides home fans with the chance to see title winners in action. That said, such thinking might actually ‘rub salt in the wounds’ – rather like a darts-based game show from the 1980s (Bullseye) in which the comedian-host showed losers “what they could have won”. Sometimes a car!

A superb start, as the team quickly found top gear, initially raised hopes it could be Longmead Stadium hosting a championship party in 2019.

Anyway, an enthralling conclusion is expected and the Kent challengers can still win a consolation prize - promotion via the play-offs.

The target is anywhere in the top five, but it is worth aiming for second, or third, because such a finish sets up a duel, or duels, with home advantage.

The faithful are likely to be grateful for a play-off spot, especially after a dismal period during the closing months of 2018 led to a plunge down the table. By the end of December, the elevation aspiration had seemingly come down with the Christmas decorations.

But Steve McKimm’s men produced a miraculous recovery after the New Year and soared up the division like an arrow.

Paradoxically, it was during the bleak spell Tonbridge inflicted a rare defeat on the eventual runaway leaders. Most clubs chasing promotion this term suffered dips in form and it is those peaking at the right time, including the Angels, still dreaming of National South status.

Dorking earned the one automatic slot because of consistency throughout the campaign.

So, how do things stand? The home squad line-up on Saturday in a positive frame of mind, having only lost twice during Bostik encounters in 2019.

The run has meant the club darted up the table, while also chalking-up a decent lead over rivals.

Regrettably, the latest miss occurred last weekend at Leatherhead, a side vying for one of the precious positions. The other reverse was at the hands of Merstham, by the same 0-1 margin, and the Moatsiders are the other outfit in with a chance of hitting the bullseye.

A double of treble-points, plus a couple of singles, would take the men from Longmead up to 74, which would be beyond the reach of any challengers currently below the line. The number on the board at the moment is 66 and the higher figure only comes into play if rivals score the maximum number on every visit.

Doing the maths, well arithmetic for this writer’s numeracy and scoring ability, it is straight forward – not requiring geometry sets, trigonometry or algebra. The situation is entirely in the Angels’ own hands and within their reach.

There are four games left of the run-of-the-mill Isthmian campaign. The first is the mouth-watering opportunity to run the rule over the runaway leaders, Dorking Wanderers. Details of the visiting playing staff and management can be found in Matt Davison's article in the matchday programme.

The next two examinations are tough tests against promotion rivals, starting with a Good Friday (April 19) outing to fourth-placed Worthing. As things stand, the Rebels are currently three points behind Tonbridge.

Steve McKimm’s men have another one-point advantage over Carshalton Athletic (fifth), the last scheduled visitors of the bread-and-butter season – prior to eagerly hoped-for play-off feasts. Another sizable crowd can be expected for the contest on the Easter Bank Holiday Monday (April 22).

A trip to Potters Bar is on the itinerary for the following Saturday (April 27).

Crucially, the margin between the Angels and Leatherhead, in sixth place, and Merstham (seventh), is five points. The maximum total available to the pair is 73.

For Tonbridge, the fixtures provide the opportunity to assess potential opponents – should a top-five berth be secured. The remaining matches include encounters against the current occupiers of fourth and fifth.

People already know what to expect from the Tanners, the architects of the aforementioned defeat on April 6.

There have also been fairly recent tussles with Merstham, plus the teams further adrift, Bishop’s Stortford (eighth on 58 points) and Lewes (ninth on 57). The score-lines were a 4-3 triumph in Hertfordshire and 0-0 on Sussex soil.

The outcome of contests with Haringey Borough (second on 68) involved 0-4 defeat in the capital during November, but a 1-0 win near the beginning of 2019.

The arithmetic is far simpler this year because everyone in the Bostik Premier has played the same number of games. To avoid more difficult mathematics, involving goal difference, goals-for, plus other complexities if still unresolved, the Angels’ target to definitely qualify is 74 points. That is based on the other runners and riders earning the maximum from all outings.

It is expected to be a rigorous run-in for Steve McKimm’s stars, with probable dress rehearsals between the protagonists likely to take centre stage for the grand finale. The five-point cushion could prove crucial.

Competing against the Bostik best just before the curtain comes down on an exciting and, often surprising, season could be another important factor. The need for peak performance and ‘raising the game’, as the saying goes, should provide valuable preparation for any semi-final or final showdowns.

Opponents from another league are also in the equation for 2018/19 - should the Angels reach that stage. If they do, it will be doubles and trebles all round!

The vital Bostik Premier clash between Tonbridge Angels and Dorking Wanderers, at Longmead Stadium, Darenth Avenue, on Saturday April 13, is a 3pm kick-off.

We are very grateful to our match sponsor Clive Gray who runs the Tonbridge BBQ Company for his support this afternoon. We hope Clive and his grandson who is Mascot enjoy their afternoons with us.

There is a large and free-of-charge car park at the ground.