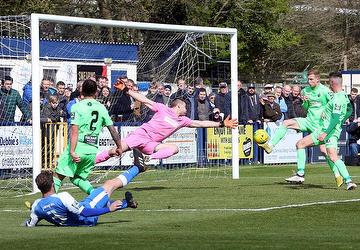 Dorking Wanderers showed why they are Bostik Premier champions by controlling proceedings at Longmead, providing a masterclass in good possession football and being patient while at the same time taking their chances when they came.

Tonbridge for their part did create half chances but largely had to play second fiddle to their hosts. They will need to put this defeat behind them as they prepare to face playoff rivals Worthing and Carshalton Athletic in their next two fixtures if they are to join the end of season sudden death showdown.

The first half saw Dorking largely content to move the ball around in midfield and keep possession choosing their moments to go on the offensive but when they did they always looked capable of scoring.

In the 17th minute Matthew Briggs suddenly accelerated into the Tonbridge final third coming in from the right and whilst his on target effort was parried by Angels keeper Jonny Henly the ball fell kindly into the path of Jason Prior and a Striker of his experience was never going to miss from that range.

Just when Angels thought they might get to half time just the one goal adrift Dorking struck again. James McShane whipped in a cross and no Tonbridge defender had picked up the run of Reece Hall at the back post who shot firmly past Henly to make it an interesting half time Talk from Tonbridge Manager Steve McKimm.

Tonbridge had created chances during that first period with Tom Derry, Jack Parter and Arthur Lee all going close and perhaps the best chance falling to Joe Turner in the 36th minute who forced a good save from Dorking keeper Slavomir Huk.

The second half saw a distinct improvement from the Angels but with a two goal deficit it was always going to be a mountain to climb against a side like Dorking who controlled events calmly and efficiently and who never really looked like relinquishing their lead.

There were half chances for Sonny Miles, Turner, Adem Ramadan, and Tom Derry whole Jared Small put in some teasing crosses but no one in a blue shirt could take advantage.

Dorking coach Al Craig said afterwards “I thought we controlled the entire game ,we played with confidence and I have to be very pleased with the overall performance.”

A disappointed Steve McKimm said: “The players have to realise the opportunity they have. We are still very much in the mix and they need to get themselves over the line. We shall work hard, and sort a few things out at training on Tuesday and Thursday ready to face Worthing on Good Friday which will be a huge game.”