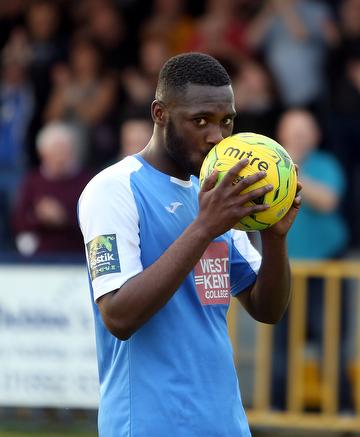 Angels take a step closer to the play-offs

Tonbridge took another huge step towards the playoffs with victory over relegation strugglers Harlow Town.

With a perilously small but experienced squad Angels Boss Steve McKimm would surely not have had to think too long about his selection. Tom Derry and Chinedu McKenzie started as the two strikers - what an impact the latter was to have - with Alex Read called from the bench later in the afternoon against his old club. Joe Turner continued with his somewhat unfamiliar role in central midfield but as at Whitehawk the previous Saturday he was to have an excellent game.

Harlow had been shipping goals at an alarming rate in previous matches and if their objective was to steady the ship in that respect then you could say they partly achieved that on today’s evidence but despite signing a group of players on deadline day they will have to be far more inventive in front of goal if they are to escape the drop.

The game was only a minute old when the home side might have taken the lead through the unmarked Tom Derry to convert Adem Ramadan’s cross. They only had to wait another 11 minutes when a through ball to Derry put him clear. The onrushing Hawks keeper Marcin Brzozowskionly by now outside the area was forced to head the ball which fell into the path of Chinedu McKenzie who expertly the lobbed the keeper to put Tonbridge 1-0 up.

The Angels continued to largely dominate with chances falling to the goalscorer McKenzie, Derry and Jack Parter.

There were occasional raids for the visitors with Thomas Hitchcock in the 28th minute and four minutes later David Mooney both with off target efforts.

In the 54th minute Derry was brought down by Brzozowski after good work by McKenzie. After a discussion with his assistant the referee pointed to the spot and although Brzozowski saved Joe Turner ‘s spot kick McKenzie was on hand to turn in the rebound.

The Hawks could get little change out of the Angels defence and the home side continued to control affairs. The game was safe for the hosts on 79 minutes when that man McKenzie turned in Alex Reid’s cross for his hat trick and although Harlow managed to grab a consolation in the 86th minute through Matthew Foy there was never any doubt the points would remain in Kent.