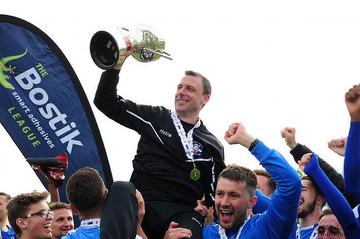 Angels entered into uncharted territory when by overcoming Merstham in the Bostik Premier Play-Off Final they qualified for what has become known as a Super Play-Off against a club from the Southern Premier South which it is now known to be Metropolitan Police with the winner gaining promotion to the National League South.

So that meant there was no winner takes all outcome to this game, but for all that Angels have won a major trophy and made an addition to their honours board and so it was an afternoon to be savoured by the home side’s supporters.

Getting the large crowd of 2268 into Longmead was something of a logistical challenge and meant a 15 minute delay to the kick off. When proceedings did eventually get underway it was the home side that first showed with Jack Parter’s cross in the 3rd minute testing the Merstham defence but no Angels player able to get on the end of it. Two minutes later an Arthur Lee long throw eventually fell to Joe Turner but his on target effort was deflected away for a corner.

A Merstham effort on 9 minutes was just wide but Tonbridge were still in the ascendancy when 2 minutes later Tom Derry headed on to an unmarked Chinedu McKenzie, but the Angels striker couldn’t properly control the ball and the effort was weak.

The Moatsiders were starting to get much more possession by now with their no 9 Walter Figueira looking the danger man. In the 28th minute Sonny Miles was the saviour expertly clearing his lines following a dangerous looking Merstham attack. Two minutes later Gus Sow for the visitors made a dangerous run down the right flank but again it was the Angels defence that came out strongest.

Goals change games and despite a period of Merstham dominance which perhaps they were never quite going to repeat, it was the Angels who drew first blood. A Turner attack down the left in the 34th minute produced a good cross which Derry tapped to the unmarked McKenzie and he was never going to miss from relative close range.

Just before half time perhaps the most controversial incident of the whole game occurred. An altercation between Sonny Miles and Oliver Cook resulted in referee Michael Ryan sending both off presumably for violent conduct.

The second half saw a similar pattern to the game with Merstham prepared to play their short passing game and Tonbridge more content to hit with pace on the break. Figueira did make himself the space for a shot in the 49th minute andJonny Henly was forced to dive quickly to his right to avoid the ball sneaking in at his near post.

McKenzie for the home side was almost through two minutes later but at the other end a penetrating attack from the visitors resulted in Jack Parter having to concede a corner.

But the game was by now starting to turn in favour of Tonbridge and this was typified in the 67th minute when a fabulous move initiated by D’Sean Theobalds saw him find McKenzie who aware of Turner’s run passed the ball to the winger but with the goal at his mercy the execution didn’t match the run and the ball went agonisingly wide.

Substitute for Merstham Roman Michael-Percil fashioned a shot in the the 84th minute but it was in reality it was the last whimper from the visitors. Two minutes later Parter capped a fine game with a magnificent run deep into the Merstham penalty area and was only stopped by a brave block from Moatsiders keeper Amadou Tangara.

From an Angels perspective it didn’t matter too much for on 90 minutes the excellent Theobalds was tripped in the box and Michael Ryan had no hesitation in pointing to the spot. Up stepped Turner who wasn’t going to waste time deciding where to place the ball but went for power straight down the middle to send the mass of Angels supporters behind the goal into absolute ecstasy.

A delighted Angels boss Steve McKimm said afterwords : “I can’t praise my players enough for their efforts this afternoon. The pity of it is that despite lifting a trophy if this was a normal season we would have been promoted by now. We will take a couple of days to enjoy this achievement and then start to prepare for Saturday’s game at Met Police.”