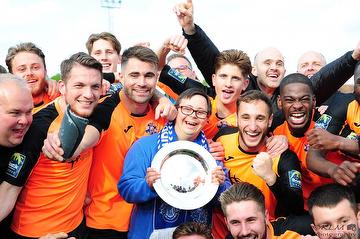 The Angels edged past Metropolitan Police to claim their place in National South in a pulsating Super Play-Off final at Imber Court.  In the end it was a deserved win for the visitors but they were made to battle every inch of the way by a young and talented Met side some of whose players surely have good careers in front of them. Perhaps it was that little bit of  extra experience that pulled the Kent side through but it was a close run thing with just 4 minutes normal time left on the clock when their equalising goal came to force the tie into extra time.

The away side made the better start and in the first 15 minutes chances fell to Tom Derry, Joe Turner twice, Adem Ramadan and Arthur Lee.  But with only their second attack of the game Metropolitan Police were in front.  A penetrating move down the left flank in the 18th minute left two Angels players on the deck and with the ball threaded through to the home side’s man of the match Ethan Chislett, the midfielder made no mistake executing a curler into the top right hand corner giving keeper Jonathan Henly no chance.

Goals change games, or periods of them, and this was certainly the case as the Met took control of events and should have added to their scoreline with five minutes later Henly called into action again with a fine save and deeper into the first period two further good chances.

Angels hadn’t entirely gone to sleep and in the 27th minute Craig Stone’s short cross found Chinedu McKenzie in a perfect position in front of the home goal but the striker fluffed his lines when it had seemed easier to score.  The half ended with Angels supporters thankful that their side were still very much in the game since in truth it had been a poor 30 minutes from their heroes.

It was game on in the 52nd minute when Arthur Lee’s free kick awarded for handball just outside the area found its way into the net via what seemed the slightest of deflections.  Angels then threatened to turn the screw and only minutes later it took a superb double save from Met keeper Bertie Schotterl to prevent the visitors from taking the lead.  On 57 minutes  Metropolitan Police were ahead again when Henley’s punched clearance seemed to hit Luke Robertson and the winger saw the rebound hit the net.

There followed more Angels pressure with midfielders and defenders pushing forward to support the strikers and applying pressure to a tiring but determined Police defence.   With time running out midfielder D’Sean Theobalds for Tonbridge took possession just inside the Met half and proceeded to jink and weave his way past players before finally making the space to execute a shot that found the narrowest Of gaps between Schotterl and the left hand post. By any standards it was a brilliant strike but its timing was crucial.

Angels has chances to finish the tie in normal time but the whistle went which meant an additional 30 minutes.  One sensed that the game had swung in favour of the away side but they still had to score that vital goal to seal it.  That came in the 97th minute when substitute Jared Small seemingly isolated on the right wing with no back up eventually managed to get the better of his marker and swung in a peach of a cross. Tom Derry as all good strikers should do was lurking with intent at the back post and made no mistake in planting a firm header past Schotterl for the Angels to take the lead for the first time in the game.

There were chances for The Angels to make the game completely  safe and Metropolitan Police forced Henly into action a couple of times but the scoring had ended and the visitors managed the game out to the delight of their 600 odd supporters who when referee Baines finally blew the whistle proceeded to undertake a good natured pitch invasion to mob their team who over the course of a season had achieved the dream of promotion.

Afterwards, Angels Boss Steve McKimm said: “For us to get promotion is testament to the extraordinary effort of everyone at this club.”