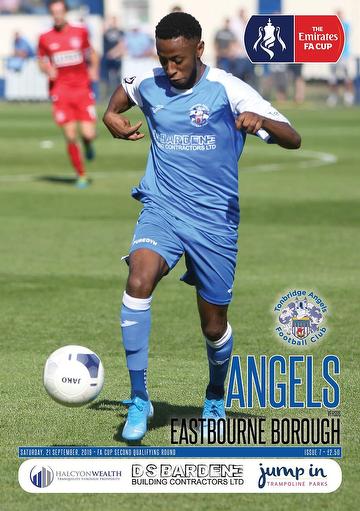 Eastbourne Borough visit Longmead tomorrow (Saturday 21st September) for the first ever FA Cup meeting between the two teams just six and a half weeks after we met in the league.

Eastbourne Borough were known as Langney Sports until 2001 when the club changed its name.  They felt the new name reflected the club’s status as ambassadors for the whole town, not just the area of Langney and to this day many supporters still call the club 'The Sports'.

Four Eastbourne Borough players are former Angels.  Nick Wheeler, who you won't need reminding scored against us in August, was Tonbridge player of the year in 2015/16, started 99 games in his Angels career and scored 14 goals and a substantial number of assists, mainly to Nathan Elder's head.  Michael West played a month on loan for us last season, goalkeeper Tom Hadler ended the 2014/15 season with us on loan from Gillingham and fellow keeper Scott Chalmers-Stevens was player-goalkeeper-coach under Tommy Warrilow and tends to be the named sub keeper for Borough.

This season, after beating us in the second game of the season, Eastbourne went on a run of scoring just one goal in five games, but Greg Luer and Elliott Romain have shared the six goals they've scored since then.  Luer scored at home to Hampton and away to Bath as well as netting the second against us while Romain, formerly with Maidstone and Welling, scored a hat-trick against Hampton and the second last Saturday, and he's the club's leading scorer on four.  Luer joined Eastbourne having won promotion with Woking last season.

One player to watch in midfield is Sergio Torres.  The Argentinian midfielder played in Steve King's successful Whitehawk side  which made the play-offs in National League South, and has played FA Cup football at an even more glamorous surrounding than he will do today.  He led out Crawley Town when they faced Manchester United at Old Trafford in 2011.  Meanwhile another man in midfield is Kane Wills who we will remember from our days against Worthing in the Isthmian Premier Division.  He's also played in Kent for Ebbsfleet and Margate.

This is the 15th meeting between the sides.  In 2000/01 we drew and lost against Langney Sports with Dave Arter scoring in both games for the Angels.  In the following two seasons we played the club under the name Eastbourne Borough five times in league and cup, the Angels failing to win any of them, however our fortunes changed a little against Borough after that, winning four, drawing one and losing one of our six meetings in our first spell in Conference South.  The most memorable of those four wins was in January 2012 when Frannie Collin scored four goals in a 5-1 win which also saw former Angel Carl Rook and future Angel Clark Masters both sent off.

Turnstiles Open at 1pm so please come along early and enjoy the facilities the club has to offer including the Longmead Lounge with fully licensed bar, The Tea Shack selling delicious burgers and the shop where you can purchase all those Angels souvenirs including shirts, badges and scarves. No problem with parking as there is plenty of room adjacent to the ground.