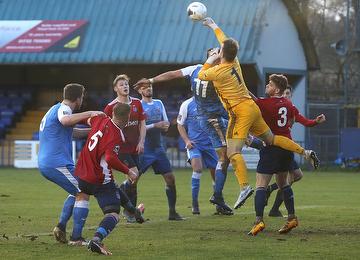 Come back Angels do it again

For the second week in succession Angels managed to recover from a two goal deficit to get something from the game, although this time they left it perilously late.

It was Angels with most of the chances in the first period but Hampton who reached the break two goals to the good.  The visitors started strongly and with the home defence seemingly bewildered it was no surprise when Danilo Orsi-Dadomo game the Beavers the lead with just five minutes on the clock.

The goal woke up Tonbridge from their apathy and they proceeded to create a number of chances with Khale Da Costa, Joe Turner and Tom Derry all going close.  Despite that it was the clinical Beavers who went further ahead in the 36th minute following a mistake on the Tonbridge back line with Wadah Ahmedi the grateful recipient.

With the pitch becoming heavier the quality of football declined and chances were few and far between but that played into Hampton’s hands and they appeared to be cruising to a comfortable win.

As time ran out Sonny Miles went up top and with Jarrod Small on one flank and Da Costa on the other the crosses stared to come in and the HMpton defence was becoming stretched.

With 90 minutes on the clock time was running out for the home side when Rian Bray was fouled in the area and D’Sean Theobalds made no mistake with the spot kick. Two minutes later after huge pressure on the Hampton goal, Alex Bentley got the final touch with the help of a slight deflection for that dramatic last gasp equaliser.

Afterwards Angels Boss Steve McKimm said : “At times it wasn’t the best of performances but I have to give the players great credit for never giving up. We’re in Monday’s draw and we’ve earned another chance.”

The replay will be at The Beveree on Tuesday 17th December KO 7:45pm.  Anyone intending to use public transport should be aware that due to industrial action on South Western Railway there is a very restricted service from Waterloo to Hampton which involves changing at Kingston.  There are no trains returning from Hampton after the game but London Buses 111 or 216 which stop right outside the ground offer a service to Kingston station from where trains to Waterloo will be available (last train 23:18). The bus journey from Hampton to Kingston takes approximately 12 minutes. For train times please go to https://www.nationalrail.co.uk/   For bus times please go to https://tfl.gov.uk/modes/buses/

For directions by road to Hampton & Richmond Borough FC please go to https://www.hamptonfc.net/a/matchday-visitor-information-48640.html

The address including postcode for the ground is : Station Rd, Hampton TW12 2BX.