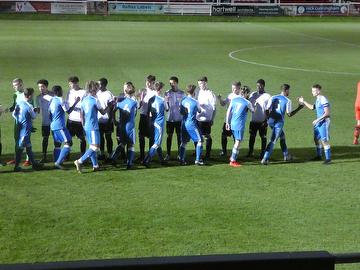 HEARTBREAKING. There is no other word to describe the emotion of our FA Youth Cup exit.

As the game entered what was supposed to be three added minutes, the Angels deservedly led 2-1 with a first half goal from Harry Hudson and a 67th penalty from Ned Lewis, but as the clock edged towards the fifth minute a cross from the right found Dover’s Harrison Pont who placed a controlled volley just inside the far post to take the game into extra time.

Both sides had opportunities to win the game in extra time but neither could find a winner and the tie was settled on penalties with Dover winning 4-2.

A full report will be here tomorrow when the emotion of the moment has passed!

Dover Athletic are a National League Academy club and the visit to Crabble in which the Tonbridge lads were the outsiders was seen as an occasion that might have daunted the youngsters but from the outset they took the game to their hosts.

Zak Wolvey fired over within the first couple of minutes and, after nine, Harry Hudson saw the Dover goalkeeper, Magnus Lewis, make a sprawling save at his near post gathering the ball on the line.

Charlie Martin, in the Tonbridge goal, was tested just the once in the opening 20 minutes before the visitors took the lead when a Ben Twist corner was headed home by Hudson despite the desperate attempt of a defender to save the ball at his post with his hands.

Unfortunately, for the Angels, the lead was to last just four minutes when a break down the left produced a superb cross which left Aaron Walker with a close range finish.

Dover had a period of control which included a well constructed move that was only denied by a wonderful clearance from Leo Deere.

The final effort of an entertaining first half fell to Ned Snowden-Lewis who put a header narrowly over the bar.

Dover came out of the dressing room, obviously with a few stinging words in their ears and looking to impose their credentials on the game and within a minute it needed a touch from Martin to turn a shot onto, and over, the crossbar.

But Tonbridge worked their way back into the game and, after 55 minutes, it was the home side that touched wood for luck as Saul Musengeyi’s lob over Lewis rebounded from the bar.

The game, highly entertaining, was end to end with both sides having opportunities before the Angels regained the lead from the penalty spot after 68 minutes when Snowden-Lewis converted after Aiden Murphy had been brought down.

From that moment, it looked like only one side was going to win the game as Tonbridge dominated the game with substitute Louis Copeland’s pace posing massive problems.

Musengeyi pulled a shot wide, Snowden-Lewis had a shot and a header deflected past posts and, with four minutes remaining, a fantastic run and shot from full back Sam Babayale was only denied by a brilliant save from the Dover stopper.

As the game entered into time added, Dover threw everything forward leaving the Angels defence stretched but bravely hanging on. With the support of their Academy compatriots in the stands willing them forward one last cross was sent to the far post and there was Harrison Pont to cushion a volley back across the goal to nestle just inside the post, sparking manic celebration in the stand.

There were tired limbs to drag through extra-time with Dover enjoying (certainly not the right word) the best of the first half but with the Angels finishing much the stronger as twice Copeland raced clear only to see his efforts smothered by the advancing keeper with the final minute attempt followed up by Snowden-Lewis who fired into the side netting.

Penalties were to follow, and as the student force decamped the stand to take position behind the goal, the pressure of the FA Youth Cup finally got to the Angels and an opening spot kick from Hudson was saved and a final kick from Musengeyi was dragged wide whilst Dover’s four attempts gave Martin no chance.

It was a brave effort for which we can bemoan the suspect time-keeping of the official whilst recognising that with a little more composure a couple of chances towards the end would have rendered the spot kicks unnecessary. Tom Parkinson said after the game that he was both gutted and proud but that it was a harsh lesson from which his students would come back stronger.