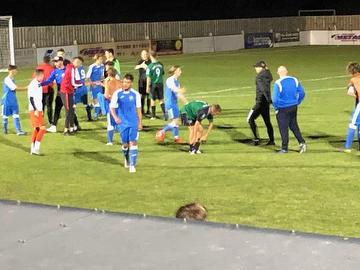 Eleven long minutes that took an eternity to pass was seen out by the Angels youngsters at Phoenix Sports as they progressed to the Qualifying Round of the FA Youth Cup where they will meet Sittingbourne at Longmead on a date yet to be decided.

Two very evenly matched teams went toe-to-toe and slugged it out with no quarter asked or given for over 100 minutes. When the referee shouted to the benches that there would be nine minutes added everyone thought he was joking, he obviously wasn’t as he played a couple more on top of that!

Tonbridge had the first scare of the evening when Leo Deere sliced a clearance over his crossbar, followed two minutes later when Sam Babayale set up Saul Musengeyi to fire into the side netting.

Both teams were guilty of giving the ball away in the opening 20 minutes as they struggled to settle down in what was a big occasion in front of an attendance that might well have exceeded three figures.

The Angels took the lead on 27 minutes when Deere sent Luke Taylor into a shooting position; his shot turned into an assist as he found Aidan Murphy at the far post to touch it home.

Phoenix responded positively with a shot at goalkeeper Charlie Martin and a free kick that drifted safely wide.

The Angels had the ball in the net again a couple of minutes before the break but Snowden-Lewis’ effort was ruled out for offside.

Musengeyi had an effort saved but it was the home side that had the momentum in the early part of the second half with Martin brought into action twice, saving from Dan Westray and the livewire Ryan Solan.

After 72 minutes, the Angels breathed a huge sigh of relief when a shot from James Ryan was millimetres wide of the left hand post.

The near miss sparked an intense 10 minutes of corners and free kicks that were pumped into the Angels box but with skipper Harry Hudson marshalling his back line magnificently the spell came to nothing.

Indeed, with five minutes of normal time remaining, it was Hudson who planted a header from a free kick against the crossbar.

As the clock entered in the prolonged time added and with Phoenix throwing bodies forward, Tonbridge substitute Louis Copeland twice went close to sealing the game and in the final minute a 25 yard effort from Ben Twist brought a superb save out of Alex Warren.

A highly entertaining encounter that perhaps the referee enjoyed so much he wanted it to go on, and on!

Tom Parkinson said after the game that he was proud of his team that had stood up to the battle in a scrappy game.