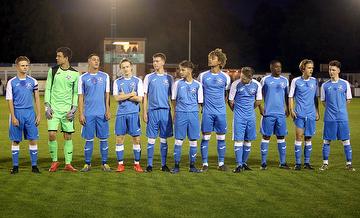 A last gasp winner from substitute Louis Copeland sent Tonbridge Angels through to a FA Youth Cup Second Qualifying Round tie at Dover on a date to be confirmed. The winner was joyously received by a passionate support that had created a great atmosphere throughout the evening.

Sittingbourne proved to be gutsy opponents and though they heavily conceded the majority of the possession in the second half they defended heroically and would have gone home bitterly disappointed to have lost the game so late.

In fact, in the opening 10 minutes it was the visitors who forced the Angels on to the back foot. A header employed Angels’ keeper Charlie Martin in the first minute and Tay White fired narrowly over after eight minutes as the home side took time to settle into the game.

Tonbridge appeared to have wrestled control of the game back in their favour when Sittingbourne went in front after 17 minutes. A huge throw into the box was mishandled by Martin, who was only able to help the ball into the net.

It was a wake-up call for the home side and they pressed forward to repair the damage done by their relatively slow start.   Ned Lewis, who proved a constant threat to the Brickies, tested Reece Heaseman; Alex Thompson sent a header over and with their best chance a Ben Twist corner was headed over by Harry Hudson.

On the stroke of half-time the Angels finally found an equaliser that had been a long time coming. Sam Babayale lofted a free kick into the box and Saul Musengeyi was on hand to bundle home a header at the far post.

The second period was almost entirely dominated by the Angels but Sittingbourne were steadfast and the Angels wasteful.

Sittingbourne persistently gave away free kicks in dangerous areas around their box but a mixture of deliveries that were not quite right and finishes that missed by inches failed to punish the visitors misdemeanours.

Tonbridge went close to going in front when a through ball by Zak Wolvey sent Lewis clear but his shot past the advancing keeper struck the left hand post.

The chances continued to come and go whilst the opposition were restricted to a single second half effort from White that was comfortably saved by Martin.

As the clock ticked towards extra-time, Lewis produced a defence splitting pass for the pacy Copeland to draw the goalkeeper and clinically finish into the bottom corner for a desperately late, but so deserved winner.

Manager Tom Parkinson was naturally delighted with the result whilst being disappointed that given the chances created the game wasn’t settled earlier. But he was fulsome in his praise for the party atmosphere that was generated in support of his team. An interview will follow on the website shortly.