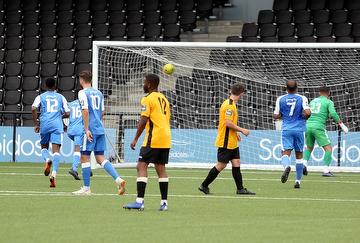 It was always going to be a tougher test for the Angels in meeting the Isthmian South East champions Cray Wanderers at Hayes Lane Bromley in their 4th pre-season friendly.  If the first three friendlies were as much about getting the rustiness out of legs as finalizing the tactics then this afternoon's encounter was more to do with how the final 1st team squad for the initial competitive encounter against Dulwich Hamlet is going to look and how its going to play together.

Its a bit of a cliché but managers will say you can learn more when you lose than when you win and certainly there was much to digest for the Angels bench as they saw their side go down 2-4 to an enterprising and skillful Cray Wanderers side who surely will do well in Isthmian Premier.  The home side started off like an express train putting pressure on the Angels defence with in the 1st minute the no 11 getting behind the away defence and putting in a shot with the angle perhaps just that too tight but it was an intent of things to come.

On six minutes Angels' Jared Small produced a decent cross field pass that reached Liam Smith with his subsequent cross finding the head of Alex Read but the attempt was off target and in truth it was to prove to be a very rare Tonbridge incursion so far as the 1st period was concerned.  Meanwhile at the other end The Wands were quite simply enjoying their football moving the ball at pace and providing space for their colleagues to run into.  On eight minutes Freddie Parker converted a brilliant cross from his right back and nine minutes later the same player again was on the scoresheet following some clever footwork that bamboozled the Angels defence.  In fact Cray could have added to their score a minute later when the away defence was left admiring the forward play but this time they managed to somehow scramble the ball away.

The game did start to settle down somewhat but it was Cray who continued to look the likelier to score with Angels unable to establish any momentum. On 27 minutes Tonbridge had their keeper Jonny Henly to thank for keeping the scoreline down to respectable levels as he pulled off a finger tip save.   The half hour mark saw Alex Read put through but Cray's keeper came quickly off his line to half clear although for a split second an unguarded net beckoned but no one in a blue shirt could take advantage.

On the stroke of half time Liam Smith was brought down just outside the area but Tommie Hession-Harris' free kick was straight at the Cray custodian. The visitors could consider themselves fortunate to be only the two goals adrift.

The inevitable substitutions at the break saw the introduction of D'Sean Theobalds and Tommy Brewer and immediately there was more bite, creativity and vision for Tonbridge in the midfield areas.

That said Cray's no 16 saw his header from a corner crash against the away crossbar.  It seemed the match had been sealed when Cray were awarded a penalty in the 59th minute and up stepped the vastly improved ex Angel Joe Taylor to successfully convert.  A minute later however, Tonbridge's second half improvement was confirmed when a pass from Theobalds to Small saw the winger cross to Tom Derry and the striker squeezed the ball between the Cray no 1  and the post and it was game on.  Nine minutes later a Cray defender was adjudged to have handled in the area and Chinedu McKenzie dispatched the penalty to make it 2-3.

The equalizer seemed a distinct possibility with Small doing some good work on the right flank and Derry looking hungry but it was not to be and the scoreline took a more definitive look in Cray's favour when a free kick from the edge of the area bounced over Ted McDonnell and into the net during stoppage time to give the excellent Freddie Parker his hat trick.  It was hard luck on the substitute keeper currently training at Charlton Athletic who had done well in his second half outing.  Very pleasing for the Tonbridge support however was the sight of Joe Turner  making a cameo appearance the last 10 minutes following his recovery from a hernia operation.