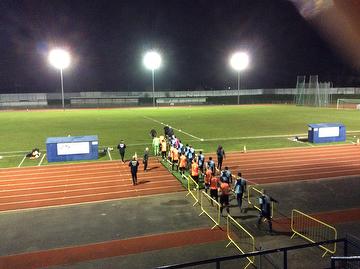 With a shortage of 1st team fixtures due primarily to pitch problems at The Halcyon Wealth Longmead Stadium a friendly was arranged via Twitter with Croydon FC of the SCEFL Division 1 at their Croydon Sports Arena base.

Despite the gap in league standings the hosts provided decent opposition for the Angels and although inevitably there was more pressure from the visitors there was just the one goal difference at the break with Sonny Miles heading home from a Khale Da Costa corner in the 20th minute.

The expected collection of substitutions on the hour mark for Tonbridge momentarily seemed to unsettle the side to the extent that Croydon scored a fine equalising goal in the 64th minute.

It seemed to wake the visitors up as they suddenly started to make their superior league status tell.  Academy player Harry Hudson turned well in the goal area and fired home to restore Angels lead in the 71st minute. Substitute Ben Greenhalgh then got in on the act with a fine strike from the edge of the penalty area in the 82nd minute and the scoring was completed in the 84th minute through Harry Donovan.