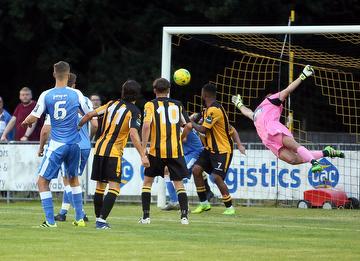 For the first time during the pre-season programme there was a more recognizable shape to the squad with supporters able to see how the side is starting to gel. Unlike the first two friendlies with almost different line ups for each half, this evening at East Grinstead there was just the one side with a number of substitutions. This allowed a more settled look to proceedings and it showed with much more fluent football on offer.

Numerous chances were created and if there was a concern it was that perhaps not enough of those chances were put away although credit the Wasps defence who worked very hard all match.  D'Sean Theobalds ran the game from midfield and is going to be a hugely important player for the Angels in their upcoming campaign in National South while in the battle of the two wide men for the right wing berth, Jarrod Small and Khale Da Costa, neither did their chances any harm.  Tommie Hession-Harris, one of the trialists is also making a claim for a 1st team place following his performance in both central midfield and defence.

Following a host of chances for the Angels in the early stages of the game there was in the 19th minute a sustained attack on the East Grinstead goal with eventually Chinedu McKenzie hitting the post and Khale Da Costa making no mistake with the rebound.  On 36 minutes a Theobalds corner saw a header by Hession-Harris with McKenzie finishing off at the far post.

The second period saw the visitors continue to largely dominate proceedings with neat approach play cutting through the Wasps defence with only the acrobatic work of the home keeper keeping the scoreline down to respectable levels.  in the 68th minute the Angels 3rd goal came from Da Costa making room for himself in the inside right channel and making no mistake with a fine shot that had goal written all over it as soon as it left his boot.

Tonbridge's final goal came on 87 minutes with a looping header from Tom Derry although nine minutes earlier the striker had been unlucky when hitting the woodwork. Credit East Grinstead who worked hard all match and played some good passing football in midfield areas but found it really hard to get past the Tonbridge defensive set up.

Afterwards Assistant Angels Manager Barry More said: "There was more of a 1st team look to things tonight and I thought we played some good football and created a lot of chances.  Our experience and pace shone through. All the boys were very positive."