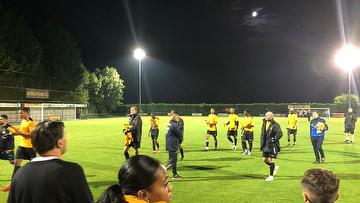 Angels go down in Merstham friendly

Angels were defeated 2-1 away in a friendly against Bet Victor Premier (Step 3) side Merstham on Tuesday September 10th.

It was an opportunity for Angels boss Steve McKimm to have a look at some different players, give some time to 1st team squad members short on minutes, and try out some of the Angels Academy Elite lads.

Despite Merstham taking the lead in the 53rd minute with a strike from substitute Yannick Monga, the Angels equalised through Chinedu McKenzie in the 72nd minute.  Merstham restored their lead two minutes later through another substitute Jaheim Bevet Bellibili and that's the way it stayed.