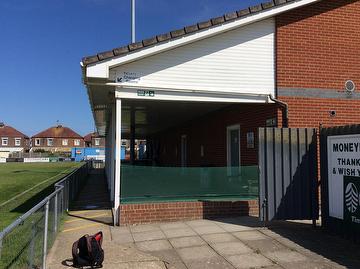 Two penalties one in each half were enough to bring victory for Moneyfields against their higher ranked visitors on a sun drenched afternoon on the South Coast.

Angels Boss Steve McKimm said there was much to take from the game and work on in the four training sessions and one friendly game still available to the side before the big kick off in two weeks time when Dulwich Hamlet come calling at Longmead. “If we play like that not only against Dulwich but other National South sides we will be in trouble but we know what we have to work on and we will get it right.”

The spot kicks came in the 35th and 56th minutes, the first for blocking off a home forward by Alex Bentley, the second conceded by James Folkes with the Angels defence undone by a penetrating Moneyfields attack.

The first half saw the best of the Angels attacks with Joe Turner and D’Sean Theobalds at the heart of most of the moves. Chances fell to Tom Derry, Alex Read, Khale Da Costa and Turner himself.

In the second period Jared Small caught the eye with some of his ball work and provided two decent efforts that worked the Moneyfields keeper. But the hard fact was that somehow the Angels never looked like likely to break down a well organised Moneyfields defence.