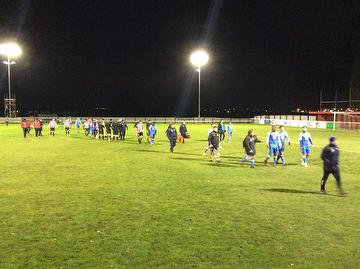 Honours Even as Sheppey Utd provide good opposition for Angels

Angels Boss Steve McKimm declared the game a “Worthwhile exercise”  as his side was forced to twice come from behind to fashion a draw in this hastily arranged friendly with SCEFL Premier side Sheppey United.

On a very cold evening at the Havill Stadium spectators were treated to an entertaining game with plenty of action but it will be those of a Sheppey persusion who will have left the ground slightly the happier having seen their team match a side who play their league football three levels higher.  Angels 1st team regulars Jon Henly, Joe Turner and Khale Da Costa did not travel.

The visitors started off at a fast pace and dictated events in the opening 10 minutes with Jared Small in particular showing up well on the left flank and it was he who had the first genuine chance on 7 minutes but there was no power in the on target effort which it made it easy for the home 'keeper.

Sheppey were however starting to show signs that this would be no push over for the Angels and a period of pressure was only finally concluded with the ball running along the away goal line and to eventual safety.

New Angels loan signing Ben Greenhalgh saw an effort go close in the 14th minute but it was Sheppey who took the lead a minute later when a cross from the left with Angels keeper Ted McDonald seemingly favourite for the take was however headed into the corner of the net by a Sheppey striker.

Sheppey were now in the ascendancy and in the 22nd minute following a poor clearance from the somewhat nervous McDonald a very good chance went begging for the home side.

Angels dragged themselves level in the 31st minute when good work between Jason Williams and Jared Small saw the latter squeeze the ball between keeper and post. Would this now provide the spur for the away side to take control?  Worringly, for McKimm it was the home side who nevertheless continued to play the better football with accurate passing and good running off the ball which the Angels quite frankly couldn't equal.

In the 39th minute the home side took the lead again with a fine 25yd strike from their no 4.  Some might have argued that McDonald could have made a better effort with the attempted save but the truth was the Angels defence in the build up could and should have done far more in closing down the scorer.

Just before half time McDonald was forced into a fine save which maintained the difference to just the one goal at the break.

The expected changes during half time which along with suitable advice from the management team saw a much better second half performance from Tonbridge with a two man strike force (Williams and Tom Derry) and Greenhalgh moving to left wing putting much more pressure on the home defence.  It was the latter's assist that created the own goal from No 5 that drew the sides level in the 53rd minute.

Encouragingly, Angels were now making chances typically in the 76th and 80th minutes and despite not putting them away the overall performance was much improved.  However as the clock ran down Sheppey saw perhaps the opportunity of a notable scalp and had a huge chance to win the game late on but the forward blazed over.  Immediately at the other end Ned Lewis who had done well since he came on was set up by a fine pass from Tommie Hession-Harris but was not quite able to bring the ball down under total control and consequently saw his effort drift wide of the left hand post followed immediately by the referee's full time whistle.

Afterwards, McKimm said; "We lacked a bit of quality in the first half and needed to be better both on and off the ball.  In the 2nd half we played with much more energy and purpose and I thought the three lads from the Academy did very well. Jason Williams and Ben Greenhalgh demonstrated how they will both bring extra impetus to the side going forward.  Unfortunately Alex Bentley was forced off due to an ankle injury and that will have to be assessed in the coming days.  Finally, my sincere thanks to Sheppey for arranging this game at short notice and also for providing excellent opposition.  They are a credit to SCEFL Premier"