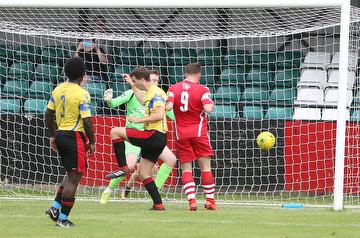 Angels pre-season continued with a look at those players who might either break into the 1st team or could possibly feature on a dual registration basis. To give everyone a fair chance, virtually two separate teams were played in each half with the more established players also having the chance of a run to get any rustiness out of their legs.

It was something of a mad opening 10 minutes for the visitors who found themselves two goals down to their Isthmian South East hosts.   After three minutes a good run down the right flank resulted in Sittingbourne’s no 9 making the conversion.  The Brickies kept up the pressure and five minutes later went further ahead when following a corner, a moment’s hesitation in the Angels defence resulted in Tom Derry putting through his own goal.

The arrears were reduced in the 12th minute when a perfect delivery from Tommie Hession-Harris saw Sonny Miles meet the ball with a well placed header. The scores were evened up in the 26th minute when Tommy Brewer made no mistake from 10 yards out following a free kick from Hession-Harris that caused confusion in the Sittingbourne defence.

Angels chances fell to Jared Small, Ellis Brown, and Liam Smith but on the stroke of half time Tonbridge ‘keeper Joe Roberts was adjudged to have handled the ball outside his area although the free kick was somewhat wasted by Sittingbourne and it was therefore all square at half time.

The Angels 2nd half team with only Miles, Smith and Brewer playing the full 90’ continued to make chances but Sittingbourne matched their opponents in terms of possession and attack but suffered from simply not finding the right final ball or wildly inaccurate shooting.  The new Angels goalkeeper, Ted McDonnell only had one serious save to make during the 45’ when in truth he should and could have been much busier.

At the other end there were chances for Harry Main (yes, nephew of Longmead Legend Jon Main), and Alex Read, but it was Rhyle Ovenden who provided the spark for what proved to be the winner.  A surging run deep into the Sittingbourne defence set up the chance and although Josh Stirman couldn’t quite take advantage, the resultant corner saw Miles on 87 minutes head back across goal and there was ace predator Read at the far post to convert past the Sittingbourne keeper.

Afterwards Assistant Manager Barry Moore was pleased with the overall performance.  “Apart from a mad first 10 minutes we subsequently gave ourselves some discipline and played with much more cohesion and organisation. Readie is a great poacher and has lost none of his predatory instincts popping up with the winner near the end.”