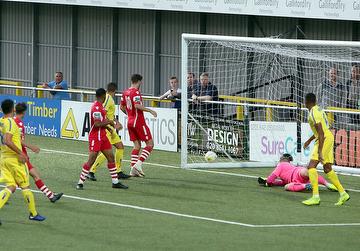 Angels pre-season gets underway with win at Sutton Common Rovers

The 2-0 win for the Angels will matter less to Boss Steve McKimm than getting some minutes under the belts of his new signings and the chance to have a look at some trialists who have been recommended by other managers.

The hosts, Sutton Common Rovers, will perhaps have considered themselves a touch unlucky not to have achieved parity on the night as they certainly created chances but just weren't able to take them including a penalty miss in the 51st minute with the spot kick crashing against the Angels crossbar.

From a spectators point of view it was hard to read too much into the overall pattern of the game as the visitors fielded two separate sides, one in each half, with a number of players unfamiliar to the away side's supporters.

New signing Khale Da Costa was a threat on the right flank and produced the cross that opened the scoring for Tonbridge in the 35th minute through Chinedu McKenzie.  On the left wing Ellis Brown on trial put in a performance that should win him another chance.

It was the right wing again in the second half that was to prove fruitful for the Angels but this time it was Jared Small in the 80th minute who needed no help when he came up with a fine individual strike from a tight angle.  Its going to be an interesting competition between Da Costa and Small for that no 7 shirt but as they say 'a nice problem for the manager to have.'