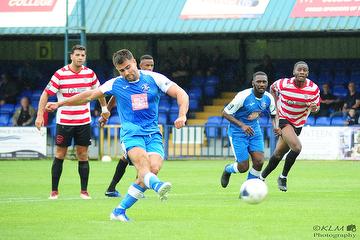 Arguably the first period saw Angels play perhaps their best football of the pre-season programme as they went head to head with a Kingstonian side expected to challenge for honours in the upcoming IsthmIan Premier campaign. Both sides moved the ball around accurately and with pace on the perfect surface made even quicker with the showery rain.

Tonbridge made the better start with Khale Da Costa on the right wing causing early problems for the K’s defence. The Surrey side gave notice however in the 10th minute when Angels James Folkes nearly put through his own goal under pressure from the away forwards. Two minutes later Kingstonian were ahead following a glorious cross field pass to Reece Hall on the right flank who finished accurately past home keeper Jonny Henly.

With Tommy Brewer and D'Sean Theobalds running the central midfield areas for Tonbridge and the two wingers Joe Turner and Da Costa constantly making themselves available, Tonbridge largely took control. The hard working Brewer was fouled just inside the K’s half and took the free kick himself noticing the clever run of striker Tom Derry who was unceremoniously brought down in the area. Turner dispatched the penalty in the 26th minute to level the scores. In the 38th minute Hall’s fierce drive went just wide of Henly’s right hand post but it was the home side who finished the half the strongest.

Angels seem to start the second half more slowly and they were to pay a heavy price for that lethargy. A through ball in the 60th minute saw Louie Theophanus clip the ball through Henly’s legs to put K’s ahead again. Three minutes later another through ball appeared to catch the home defence out yet again and there was Theophanus to rifle the ball home. With the Angels defence now bemused a cross from the right wing saw Theophanus grab a five minute hat trick and the game should have been over as far as the result was concerned.

However Tonbridge did hit back with Tommie Hession-Harris making a fine run and scoring from a tight angle in the 71st minute and that player was again involved with a fine delivery into the Kingstonian goal area to the unmarked Alex Bentley whose pass across goal found Alex Read to pull another back in the 80th minute.

Plenty for the Angels Boss Steve McKimm to think about with some good individual performances but some worrying lapses in defence. Also of worry to Angels fans was the sight of Turner limping off towards the end of the game.