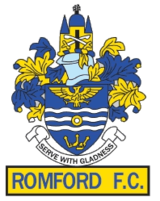 Today! Angels take on Romford in Friendly with Free Entry

Virtually as soon as the final whistle was sounded and Angels had somewhat meekly exited the F.A. Cup at the first attempt losing at Home to fellow Manarama South side Eastbourne Borough, it was always likely that Steve McKimm would want to organise a friendly fixture on the resulting blank Saturday 5th October.

He asserted that training was all very well but with a two week gap between competitive fixtures and another defeat this time by Hampton & Richmond Borough his mind was made up that the players needed the challenge of a genuine match.

That match was finally confirmed on Tuesday 1st October with the news that Romford FC would be the opposition for a friendly fixture at the Halcyon Wealth Longmead Stadium kicking off at 1:00pm.

Our visitors currently compete in the Isthmian League Div. 1 North and rather like the Angels have had a less than perfect start to the campaign with just one point from six games played.

In the 1960s and 1970’s Romford were regular visitors to the Angel Ground with both clubs playing in the ‘old’ Southern League.  The new century saw those regular visits end but there has been one competitive meeting in more recent times.  On 6th December 2016 the two sides met at Longmead for an Isthmian League Cup 3rd Round Tie which saw the match end in a 2-2 draw.  What the paltry crowd of just 133 then witnessed was a somewhat unusual event.  For the first and only time to date in a 1st team competitive fixture the Angels succeeded in winning a penalty shootout with Ugo Udoji striking the winning spot kick.

Let’s hope that the game will allow both managers to make positive progress with their respective squads irrespective of the final score.

Both the Bar and Tea Shack will be open.