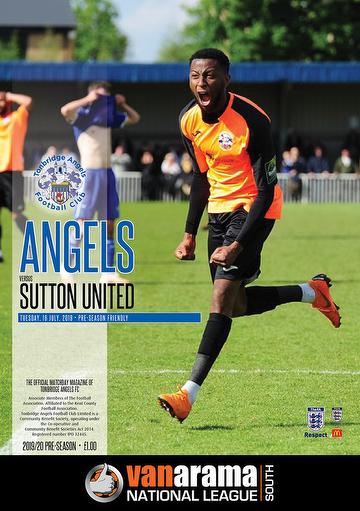 Hosting their first pre-season friendly of 2019, the Angels could have hardly asked for more classier non-league opposition than Sutton United of the Vanarama National League.

Finishing 9th last season the U's as they did the previous season did for a while flirt with the play offs but their supporters must surely be well satisfied with the Surrey club's efforts.  it seems likely they will feature in the upper reaches of their league if last Saturday's comfortable looking 3-0 win at National South Slough Town is anything to go by.

As far as the Angels are concerned with 4 out of 7 pre-season friendlies now completed the serious business of preparing how the squad will line up for the first competitive fixture against Dulwich Hamlet on 3rd August must surely now begin.  One would imagine that triallists have had their chance and if any do still remain to take part then it would seem likely there is a chance that they might break into the first team proper.

Much will have been learnt from last Saturday's 2-4 defeat at Cray Wanderers and this is the time to continue to gain from that learning.  The management team will undoubtedly be assessing how the new signings are shaping up and how those who have remained from last season's promotion winning squad are going to compete at National South level.

So its looking like the first of three key friendlies for Steve Mckimm and his staff to start to formulate not only how the starting lineup will look but also whether any fine tuning is required in terms of how the Angels are going to play.

Since our last competitive meeting with Sutton United which was in National South in 2013-14 the Surrey club has travelled in the right direction having now established themselves in the National League while the Angels have had to drop back to regroup and then reclaim Step 2  football at Longmead.  Despite suffering relegation in that season, Tonbridge did quite well against the U's drawing 1-1 at Longmead on 7th September with David Ijaha the scorer and were to go one better at Gander Green lane on 14th December running out 2-1 winners with Chris Piper and Shamir Goodwin on the scoresheet.