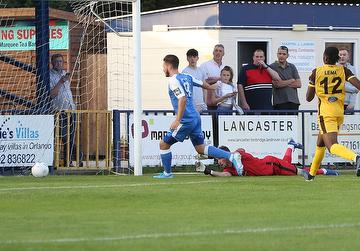 Angels supporters were sent home happy as their side stood up well to the strength and experience of a full time Sutton Utd outfit that will surely be aiming once again for the top half of the national League this season.

Two goals in two minutes lit up a first half where chances were at a premium with the ball spending long periods in midfield areas.

In the 20th minute the impressive D'Sean Theobalds for the Angels picked the ball up on the half way line and made progress down the right hand channel releasing Chinedu McKenzie who passed through to Tom Derry with the striker finishing the move from close in.

Two minutes later the Angels defence simply didn't clear their lines when they had the opportunity and eventually Aaron Jarvis with the ball having bounced around the Tonbridge 6yd box scored the equalizer for the U's.

There were half chances for United's Omar Bugiel and George Toson and 11 minutes in Jack Parter for the hosts got in a cross that both Derry and McKenzie might have done better with.

The second half produced much more action with a faster pace from both sides but surprisingly only the one goal was added to the score line and it went to the visitors.  The veteran Craig Dundas went on a trademark run down the right flank and put in a brilliant cross that forwards just thrive on and there was Jarvis to grab his second goal of the night.

Its probably fair to say that Sutton had two or three further good chances and should have converted one of those but it was perhaps just reward for the Angels who despite seeing their lineup change considerably with substitutions still kept their shape and played some good possession football on the ground.  It was arguably the best seen so far of the new signings Alex Bentley and Tommy Brewer while the two triallists Tommie Hession-Harris and Rhyle Ovenden certainly did their chances no harm with good second half performances.  Man of the Match D'Sean Theobalds was pleasing on the eye and the introduction of Joe Turner for the last 30 minutes gave the U's defence something to think about.

Afterwards Angels Manager, Steve McKimm said : "I have to be very pleased with how we played tonight. No one like to lose a game of football but I thought everyone played very well against a full time side considering  also that some were playing out of position."