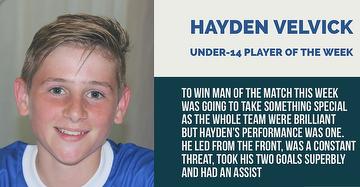 After the harsh lesson of last week, the boys took to the field in determined fashion and to put into practice what they had worked on so hard in training.

The team were on the front foot from the start and took the lead after 10 minutes when Hayden Velvick’ s run and cross found Cameron Honarvar in the box, who slid in to make it 1-0.

Metrogas started to press and after 20 minutes scored an equaliser. Similar to previous weeks a second goal for the opposition followed only a few minutes later (from the penalty spot) and conceding two goals in such quick succession is something we needed to address.

Despite this setback the team never lost its shape or let their heads drop and scored a deserved equaliser on the stroke of half time when new boy Alex Nguyen’s through ball found Velvick in the box to slot home.

The start of the second half saw Nguyen hit the post before Harvey Bennett’s deep free kick into the box midway through the half eluded everyone including the opposition keeper ands nestled in the back of the net.

Archie Gardner then hit the post and crossbar before Velvick sliced through the Metrogas defence five minutes from time to seal a deserved victory.

The boy’s energy levels were amazing, they never stopped running, working and supporting each other. Even when substitutions were made, the level and shape remained the same. A great TEAM effort.