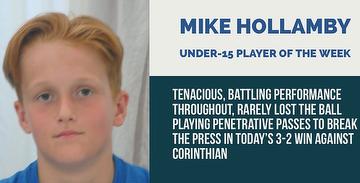 This weekend we hosted our first home game of the season, our opponents were Corinthian, who are always a tough test and a team who give you no time on the ball and play the right way.

The Angels, however, two wins from two were full of confidence, and it didn’t take long for the Angels to put the Corinthian back line under pressure.  A clever ball from Fin Wolvey around the corner found Fin Hartley’s feet who was tripped over in the box after four minutes, no penalty given. The Angels weren’t fazed and were rewarded a minute later, when some great pressing from the front forced a loose back pass towards the goalkeeper, Fin Hartley nipped in front and was taken down, penalty this time given. And after five minutes, Fin Wolvey despatched his third of the season.

There was time to celebrate and kick off, but the Angels weren’t slowing down, on seven minutes the Angels struck again. An electric start saw the Angels build the ball from the right hand side before recycling out towards left back Jacob Hodges who unleashed what can only be described as an absolute rocket from 30-35 yards into the far top corner, 2-0 to the Angels after seven minutes.

After a frantic start, the game settled and both teams found a rhythm. Two teams who were aggressive and hard working off the ball, but calm, composed and looking to play the right way on it. Credit Corinthian who dismissed the tough start and really made the game tough. The visitors were back in the game after 18 minutes with Angels looking to play out from their own goal kick the ball was given away on the edge of the box and was punished well by the away side. Chances in the first half were very rare with lots of the play taking place in the middle third. Half time arrived with not much action to note. 2-1 Angels.

The second half was tight and tense throughout with very few chances for either team.

Matt Larkin in goal had to make two saves all game and was testament to a strong defensive performance from the Angels, who were punished in their only mistake of the game.  At the other end the Corinthian keeper had a superb game claiming many crosses into the Corinthian box and dealt with all thrown his way.

A one goal lead was causing tension for the Angels who were having to work very hard to contain the quick Corinthian passing football, and it was on the break at 62 minutes that Angels built a two goal cushion. A long clearance was flicked on by Joe McCusker from the middle of the park and Max Lambert was on hand to break the defensive line and slot home.

The Angels now looked comfortable, keeping hold of the ball for longer periods to prevent having to face a Corinthian onslaught.However the game wasn’t done yet.

On 68 minutes, one of the strangest officiating decisions you’re ever likely to see or hear of. A sweeping Corinthian move from the back led to Ron Little taking down the Corinthian winger on the edge of the box, the referee blew his whistle rightly for a free kick, the ball however rolled to Corinthian forward who was incensed by the whistle believing the referee could have played on, in doing so he smashed the ball into the back of the net with all other 21 players standing still. The referee took 5-10 seconds and decides he was going to award a goal despite awarding the free kick beforehand.

However this didn’t matter in the grand scheme as Angels held on to claim their third win in as many games. A great result against a very tough hard working side!