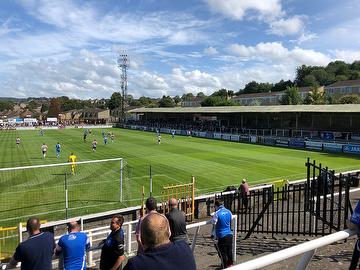 Point taken from the Romans

A hard won point against the overnight leaders, Bath City was well deserved. True enough, the Angels benefited from a missed penalty but one that was contentious to say the least.

On a warm afternoon, Steve McKimm rested Alex Bentley to the bench as he was carrying a knock with James Folkes restored to the starting 11.

Myles Roberts was brought into the action within the first minute diving low to his left to deny Ross Stearn.

The game settled down and it was into the 22nd minute before the next chance arrived with once again Roberts excelling.

Tonbridge ended the half on the front foot with D’Sean Theobalds firing over and Joe Turner missing narrowly right.

The second half started slowly with neither side registering a meaningful effort before the hour mark had elapsed.

Two minutes later, Tom Derry was sent clear, and although a long way from goal, was cynically taken out to earn the Bath player a yellow. But, in a clear case of mistaken identity, the perpetrator who was already on a booking, departed the scene and the card was shown elsewhere.

After 71 minutes, following a free kick into the box, Rhian Bray was adjudged to have manhandled an opponent leaving the referee pointing to the spot. Thankfully for the Angels, Tyler Harvey blazed high over the bar.

With ten minutes remaining Turner missed by inches and at the other end some desperate defending saw the Angels see the ball to safety.

At late penalty appeal was survived as the referee called time on a well drilled performance from the visitors.

Steve McKimm commented after the game: “Nil-Nil sounds boring but that was an exciting game. That had everything, there should have been a sending off, they got a penalty which shouldn’t have been, they didn’t get a penalty they should have. Bodies on the line, we gave everything.”