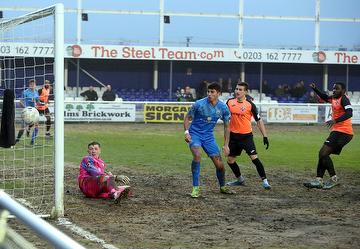 Angels fight back for point

Angels rescued a point against Billericay Town in a highly entertaining game at New Lodge having at one stage been 3-1 in arrears.  On a questionable surface, it was a credit to both sides that they managed to serve up so much quality, but it will be the visitors who will have come away the happier as they came back superbly with two goals to level things up.

If you have players of the quality of Jake Robinson and Femi Akinwande then you will always have a chance of goals and Ricay made good use of those two frontmen but Angels  boss, Steve McKimm has assembled a team that is capable of doing the ugly stuff and then suddenly turning to a more creative style of play which can catch out the opposition.

In truth compared with the second period it was a relatively quite first half.  Inevitably half chances fell to Robinson and Joe Turner was unlucky with a free kick in the 21st minute.  On 33 minutes there was a strong appeal for a Billericay penalty but the referee turned it down, choosing to caution instead the alleged victim, that man Robinson.

In the 40th minute there was a genuine sight of goal for Ossama Ashley and whilst the well struck shot was on target, Jonny Henly pulled off a superb block. Three minutes later at the other end the excellent Christ Tiehi forced Nathan Harness into a fingertip save over the bar.

The restart saw an almost immediate sequence of scoring much to the delight of the 831 spectators.  Angels started the goal rush with Jason Williams heading home after just 47 minutes. The visitors didn’t enjoy their lead for long just two minutes in fact when Billericay were awarded a penalty which Robinson safely dispatched.

Things were about to get a whole lot worse for the Angels when on 54 minutes Akinwande finished a fine run down the left with a fine shot into the far corner of the goal and then a minute later the home side’s afternoon appeared to be complete with an Alfie Potter strike.  The Tonbridge defence appeared to be in disarray while the hosts were definitely starting to enjoy themselves.

But this Angels side showed character, determination and no little quality to haul themselves back into the game while Billericay needed that fourth goal to put the game to bed from their perspective which was not forthcoming.

On 73 minutes Billericay Town only half cleared a Tonbridge attack, Tiehi picked up the loose ball and fired an unstoppable 25 yard effort that beat Harness all ends up.

Just four minutes later Williams claimed his second strike of the afternoon to put his side once again on level terms. At this point is was impossible to forecast how this match would end. Both sides to their credit went for the win and chances were created at both ends. In a nail biting conclusion Billericay were awarded three corners in quick succession but couldn’t make them count.  Tonbridge also had late chances with Williams and Turner that would have ended the unwanted record of never having won a competitive game at New Lodge.  But it ended all square and perhaps that was a fair enough final result taking into account the efforts from both sides.

Afterwards, Angels Boss, Steve McKimm said: “Very pleased with the character of the team today the way they fought back to take the draw. Should we have been 3-1 down, well that’s another matter but a point at this place has to be a good one.  We will now dust ourselves down and prepare for Maidstone on Tuesday evening.”