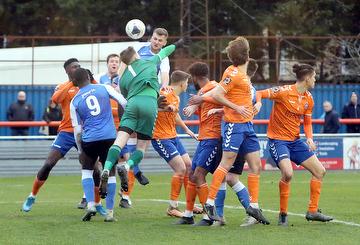 Angels win on the road

There was a feeling amongst Angels supporters that perhaps today’s (11th January) fixture versus Braintree represented the best chance to see their team get that first away victory of the campaign particularly as they had come close in recent weeks at both Hemel Hempstead Town and Maidstone United.   And so it proved with a 1-0 scoreline that whilst not particularly emphatic was over the 90 minutes fully deserved based on chances created.

With injury, illness and suspension testing Angels Boss Steve McKimm’s powers of selection to the limits, there was a somewhat unfamiliar look to the line up.  Two  players made their debuts, loanees Bilel Hinchiri from Dover in central midfield and Joshua Ajayi from Crystal Place partnering Jason Williams up front.  Liam Smith had been recalled from Sevenoaks Town and made a rare start at left back with Christ Tiehi returning from injury as the holding player.

Supporters optimism appeared well founded from the kick off. There was almost a dream start after one minute for Ajayi but he scuffed his effort after Ben Greenhalgh’s effort could only be parried by Braintree stopper Billy Johnson.  Two minutes later Sonny Miles had a free header which had to be clawed out of the air by Johnson.

Further chances fell to Greenhalgh and Ajayi but on 27 minutes Angels really should have made their dominance tell when following a cross from James Folkes left Greenhalgh with a clear sight of goal but he blazed the effort over when it seemed easier to hit the target.

A move on 41 minutes involving Ajayi, Greenhalgh and Hinchiri with the latter getting the final touch was very close to open the scoring and four minutes later Angels centre back Rian Bray was similarly out of luck on seeing his header go just over.

It was a poor half for Braintree who had only three chances worthy of note. On 17 minutes Tyler Christian-Law was through but dragged his shot. Three minutes later Liam Smyth forced a good save from Jonny Henly, and on 37 minutes Christian-Law saw his on target shot deflected for a corner.

If Angels made the majority of chances in the first half with nothing to show for it then they only had to wait one minute into the second period to go ahead although it was in somewhat unusual circumstances.  Folkes put in a cross which looked to be straightforward enough for Johnson but inexplicably the young keeper saw the ball ricochet off his body and into the net.

Johnson was to make some amends 10 minutes later when Greenhalgh with a surging run into the penalty area forced a very good save to keep the home side in the game.

It’s probably fair to say that the Angels somewhat lost their way during the middle of the second period with neither side creating very much although a Braintree free kick in a dangerous area saw the effort go straight into Henly’s arms.

On 64 minutes another cross from Folkes was drilled across the goal area - a nightmare for Iron defenders -  but nobody in a blue shirt could take advantage.

As the game entered its closing stages play became more stretched with Angels substitute Khale Da Costa through but he overhit the ball and then Ajayi also through but never really had the ball under control.

It was now time for Braintree to throw caution to the wind and put genuine pressure on the Tonbridge goal to try and get something from the game. They won a series of corners as the clock ran down but the away side kept their concentration and held out for those precious three points which meant their first double win of the season and of course their first away win.

Afterwards McKimm said :” Very pleased for the players that  they got over the line with that first away win and removes that potential psychological barrier.  We’ve put a little run together and we shall be doing all we can to carry that forward.”