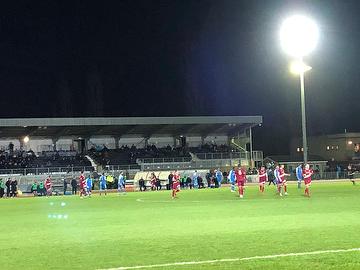 Angels slump to another defeat at the hands of the Clarets

Angels miserable record in the modern era of the game continued against Chelmsford City when they went down 3-1 at Melbourne Community Stadium.  They will know however that it could and should have been so much better against a side without a permanent manager and who had lost their last five games in all competitions.

Indeed the first 25 minutes proved the point with Angels looking much the sharper of the two sides and forcing The Clarets into basic errors. The visitors took a deserved lead on 17 minutes when Christ Tiehi worked the ball brilliantly to the bye line and crossed for the unmarked Joe Turner to slot home.

Even when Chelmsford equalised through skipper Tom Wraight in the 27th minute the Angels still looked comfortable and likely to add to their tally in the second period.

The crowd hardly had time to take their seats when Chelmsford unexpectedly took the lead in the 47th minute. A cross should have been dealt with by the Tonbridge defence but the ball fell to Leroy Lita at the back post and he wasn’t going to miss an opportunity like that.

Goals change games and suddenly Chelmsford’s tails were up. More to the point Tonbridge seemed to competely lose their way and were never able to repeat the level of football they had shown in the first half.  Chelmsford’s keeper Laurie Walker was never tested and certain Tonbridge players seemed to go missing.

Lita should have made the game safe for Chelmsford in the 85th minute when he was clean through but it didn’t matter as Tom Knowles did exactly that in stoppage time shooting from distance into an empty net with Angels keeper Jonny Henly upfield to add numbers for an Angels free kick.

Tonbridge Boss, Steve McKimm said afterwards: “From my point of view it was a poor goal to concede straight after half time and poorly defended.  It changed the game and we became largely ineffective. Things have to improve and quickly.”