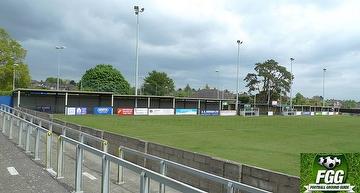 Angels make another trip down the M4 this Saturday to face Chippenham Town for a first ever meeting between the two clubs.

With the hosts lying in 16th position with 9 points and Angels in 18th with 8 points it doesn't need an Einstein to work out there's a bit riding on this fixture.  Both sides have managed just the two wins so far this campaign although credit Chippenham with one of those victories coming against big spending Billericay Town. Of course Tonbridge should feel just as confident of getting something from the game with the cheers of the home support still ringing in their ears following that 3-2 win against local rivals Dartford on Tuesday evening.

However, given an undulating pitch at Hardenhuish Park and the unpredictabilities of the season so far then anything can happen and probably will!

Chippenham Town FC was founded in 1873. In 1904 the club joined the Western League and with various spells spent in that competition throughout much of the 20th century achieved promotion to the Southern League in 2001.  At the first attempt the club reached the Premier Division.  With various play off appearances ending in disappointment, the Bluebirds eventually seemed to decide it was easier to gain automatic promotion which is exactly what they did winning the championship in 2016-17 and promotion to the Vanarama National League South.

A Kent and Angels connection awaited the club in 2000 when they reached the final of the FA Vase to face Deal Town at Wembley Stadium. They were to lose that match 1-0 courtesy of a late strike from our ex player Roly Graham.

Last season the Bluebirds finished in a respectable 13th position in National South.