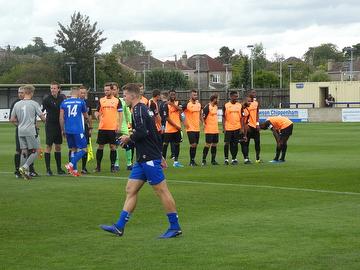 Angels failed to match the exploits of just a few days ago in beating Dartford and basically got what they deserved with too many players not quite at the level required.  Chippenham whilst perhaps not being the strongest side Tonbridge will have to face this campaign nevertheless took their chances and justified taking all the points.

Angels Boss, Steve McKimm, was not pleased with the performance.  “Four or five players were not at it this afternoon and that will cost you.  We started too slowly and lacked the intensity of our performance last Tuesday and indeed against Weymouth a week ago.  Whether they thought they just had to turn up I don’t know but it simply wasn’t good enough.  Once again we have conceded just before half time but even so I would not have been impressed with that 1st half performance.

McKimm refused to use the long journey, the size of the pitch, the slope or the short notice absence of Joe Turner due to illness as an excuse for the somewhat lack lustre performance.  “Players have to step up to the plate and operate at the levels I know they can,” he said.

If Tonbridge think they can rely on simply picking up points at home they will quickly find themselves in trouble.  They have to start getting some results away and this was quite definitely a missed opportunity to get something from the game.

Half chances in the first 20 minutes fell to D’Sean Theobalds and Ade Yusuff and just after the half hour mark Theobalds made one of his trademark excursions in the opposition’s penalty area but the ball eventually went for a corner. On 38 minutes Yusuff found himself clear but he never really had control of the ball while a minute later Jarrod Small had a sight on goal but the shot was well over.

As half time approached Chippenham stepped it up.  On 42 minutes Luke Hopper hit the side netting when in a dangerous position but just three minutes later the Bluebirds took the lead with an attack down the left a good pull back and there was Tariq Ossai on hand to tuck the ball away past Jonny Henly. In stoppage time the hosts almost doubled their lead with Angels seemingly all over the place but fortunately for them the whistle went for half time.

The second period started with a chance for Yusuff but there was a better opening at the other end when Karnell Chambers cut in from the right but couldn’t quite get the right connection.

McKimm was forced to substitute Yusuff soon after due to illness and along with Rhyle Ovenden they were replaced by Chinedu McKenzie and Tom Derry to create a double strike force.

Tonbridge from this point started to look a little more dangerous and on the hour mark saw a dangerous Small cross, a Theobalds effort and most encouragingly a Derry shot that hit the base of the Chippenham post.

But just as Angels look to be getting back into the game, Chippenham doubled their lead on 69 minutes.  Ex Millwall Chris Zebroski played a one two with Chambers and placed an unstoppable shot past Henly.

In response there was another dangerous cross from Small and Khale Da Costa grazed the side netting but the game for all that seemed to be slipping away from Tonbridge particularly as the ever willing Chambers on the right flank for the home side threatened to increase his sides lead further.

There was to be one further twist to the match. On 85 minutes for some reason known only too himself Chippenham keeper head butted Sonny Miles with a penalty awarded and a straight red card. In fact Puddy may have been fortunate to even still be on the pitch at that time as the referee appeared to miss a punch on Yusuff in the first half.

Up stepped Derry to take the spot lick and Angels had halved the deficit.  Despite moving players up it has to be said that while Tonbridge had plenty of possession in those last few minutes, they never managed to take full advantage of an outfield player being in goal, and in the 10 minutes remaining including stoppage time the Bluebirds emergency ‘keeper was never severely tested.  In fact Chippenham might have made the scoreline more convincing as a breakaway in stoppage time saw the ball in the back of the net but it was ruled out for offside.