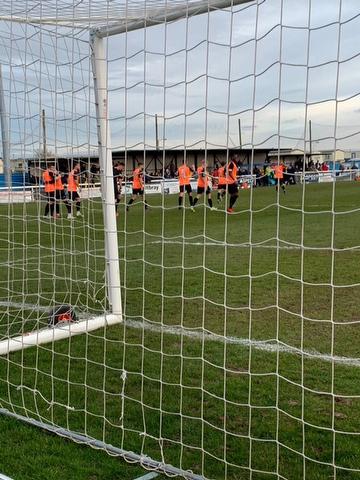 Angels central defender Rian Bray earned his side a point with a stoppage time strike that for much of the second period had looked unlikely. It certainly wasn’t a vintage Tonbridge performance but this group of players never know when they are beaten, and in this match kept plugging away and eventually got their reward admittedly with 95 minutes on the clock.

Supporters form both clubs gathering at the Aspect Arena were unclear as to whether this might be the final match of the 2019/20 league campaign or simply a possible pause to the season and for home fans there was the matter whether of an FA Trophy semi-final would go ahead at some stage.

For Tonbridge, Christ Tiehi was not available due to a close family bereavement and so Joe Turner moved to central midfield and Ben  Greenhalgh took his place on the left wing.

To the credit of the two teams, despite all the uncertainty, there was a game of football to be played and a competitive game ensued which at times lacked quality but was always keenly fought, peppered at times by some interesting decisions by the referee just to keep everyone’s attention.

Angels took the lead slightly against the run of play in the 14th minute when following a Khale Da Costa run down the right the ball was only cleared as far as Ben Greenhalgh whose deliciously angled from just outside the area beat Chris Haigh on his left hand post.

They were not in front for long as the home side equalised just three minutes later through one of their strongest players Temi Babalola and the turnaround at that stage of the game was complete on 21 minutes when following an unforced error by James Folkes possession was handed to Decarrey Sheriff who rounded Jonny Henly to place the ball in an empty net although the angle was tight.

Da Costa was again involved in the build up to what should have been the half time equaliser on 44 minutes getting in a cross with Tommy Wood sneaking in to place the ball neatly past Haigh.   But there was a lack of concentration in the Tonbridge defence a minute later with once again the left flank proving profitable for the Beachboys and there was James Blanchfield to cheekily back heel past Henly.

With five goals scored in the first period was the goal fest to continue?  Almost inevitably it didn’t and while for the first 15 minutes or so the Angels stepped up their performance with chances for Greenhalgh, Wood and Da Costa all going begging they couldn’t quite open up the home defence

Concord were never able to replicate their performance of the first period but they continued to use their left flank in the search for that goal that would probably have made the game safe for them.  With Angels starting  to push further forwards gaps started to appear in the away defence but Concord simply weren’t able to capitalise and were to pay a heavy price.

However the minutes were ticking by and it looked increasingly likely as if the visitors would leave empty handed.  Deep in stoppage time a free kick to Tonbridge was awarded inside the Concord half.  The ball was worked out to substitute Jarrod Small on the right who hung up a cross to the far post, Sonny Miles headed it back across goal and there was Rian Bray rising highest to send an unstoppable header into the net.  Cue wild celebrations for the Angels supporters!

Afterwards Angels Boss, Steve McKimm admitted it wasn’t the greatest of performances.  “Second half we told them to keep getting those crosses in which we did and eventually it came good for us. It’s another point which puts us third from bottom.  If this proves to be the last game of the season then we’ve done what we set out to do minimum.  If we eventually carry on then there is still work to do but we have games in hand.”