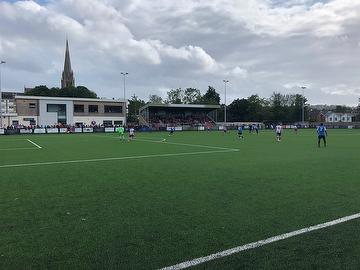 Despite a brave second half performance, the controversial sending-off of Rhyle Ovenden after 22 minutes hugely contributed to Tonbridge Angels’ defeat at Dorking which leaves them still searching for their first points of the season.

Ovenden, on his 21st birthday, had been brought into the starting 11 as Tommy Brewer was unavailable through injury. Steve McKimm also chose to start Jared Small and Tommie Hession-Harris with Khale Da Costa and Chinedu McKenzie dropping to the bench.

The Angels had the benefit of a gale force wind in the first half but such was its strength it was difficult to determine whether it provided much of an advantage.

The visitors opened brightly with D’Sean Theobalds firing wide after four minutes and Small forcing a good save out of Slavomir Huk.

A Hession-Harris corner flashed across the face of goal begging a touch, but the opening quarter-hour had been encouraging.

So it was somewhat against the run of play when the home side went ahead after 18 minutes. A challenge was won on the edge of the box and the ball slipped through to James McShane who buried his shot between goalkeeper Myles Roberts and the near post.

The pivotal moment of the game came four minutes later when Dorking’s Ben Dyett and Ovenden challenged for an aerial ball that ended with both players going down hurt. It seemed, from the touchline, nothing more than two players with their eyes on the ball culminating in an accidental coming together, but the officials had seen something different and after the referee had consulted his linesman, Ovenden was shown the red card.

McKimm speaking after the game commented: “The referee has told me it was an elbow, excessive force. I’ve watched the video and he doesn’t even lead with his elbow, he is looking at the ball. The referee has got that completely wrong. I know it’s not an elbow and it changed the game massively”.

The game itself took its time to recover from the incident and very little of attacking intent was shown until the 40th minute when Dorking doubled their advantage with a goal of clinical simplicity. A corner from the right from Tom Richards was met with the head of Jason Prior and buried in the manner that he has been doing for many-a-year.

Far from feeling sorry for themselves, Tonbridge mounted a brave second half performance that whilst not bringing any reward gives encouragement for the games ahead.

Small, who was a constant threat, had a snap shot four minutes into the half which was saved by the feet of Huk at his near post as Tonbridge set out to retrieve what seemed an impossible mission.

Stand-in goalkeeper Roberts acrobatically turned over a shot from Giuseppe Sole before, after 61 minutes, Small pulled the ball back from the right touchline for Hession-Harris to fire in at Huk’s near post.

Unfortunately the comeback was stalled in its tracks before it really began as, two minutes later, Elliott Buchanan struck a fine shot from 20 yards past the despairing dive of Roberts.

A fantastic run from inside his own half by Small ended with a shot that was parried away by Huk with the rebound falling to Joe Turner whose effort was saved by a combination of the goalkeeper and a goal line clearance.

The game had an entertaining final 20 minutes with both sides having chances but Tonbridge were indebted to Roberts for two fine saves from Sole and Richards and the intervention of the crossbar as a well struck shot from the latter rattled the woodwork.

A naturally disappointed McKimm reflected: “We didn’t deserve that result. I’m the first to say we have deserved a defeat. The first 25 minutes we were superb but the sending off has changed the game massively”.

The Angels return to Longmead on Tuesday evening and the challenges do not get any easier as early-season pacemakers Concord Rangers are the visitors.