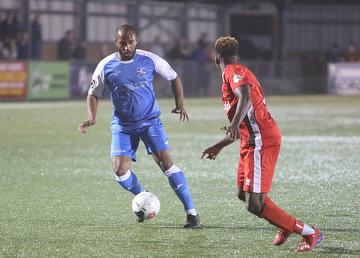 No joy for Angels down on the Coast

The Angels were deservedly beaten 2-0 by Eastbourne Borough paying the price for an inept 1st half performance.

Steve McKimm decided to go with two up front with Chinedu McKenzie partnering Tom Derry and Tommie Hession-Harris dropping to the bench. Goalkeeper Myles Roberts a loanee from Reading replaced the injured Jonny Henly between the sticks.

If McKimm had hoped the two up front might provide more fire power he was to be mistaken. The first 45 minutes didn’t produce a single chance for the Angels and although their defence worked hard and they were unable repel a buoyant Borough attack. On 14 minutes ex Longmead favourite Nicky Wheeler combined well with Greg Luer and although Luer was unable to convert, the ball was recycled back to Wheeler who had the beating of James Folkes and Roberts with a shot from an acute angle.

Just before half time Borough doubled their lead when a clever run by Luer completely cut open the Angels defence with Roberts unable to reach the ball before Luer chipped into an empty net.

There was a bit more about the Angels during the second period and they certainly asked more questions of the Borough defence but in terms of clear cut chances their hosts continued to outshine them.

If you’re going to get back into a game at this level then you have to take the chances when they come and Tonbridge are failing to do this.

Following some heavy Eastbourne pressure Angels broke quickly in the 56th minute with Joe Turner executing a beautiful pass out to D’Sean Theobalds. The playmaker was able to make space for himself on the right hand channel but his firm shot was just wide of the right hand post.

On 81 minutes Tommy Brewer’s cross was met by Tonbridge substitute Jared Small but there was not enough power in the header. Four minutes later Small’s cross was met by a firm Tom Derry header across goal and Alex Read seemed to be on hand to tuck the ball away for a consolation but somehow a Borough body got in the way and the two goal advantage to the hosts remained.

Angels Boss Steve McKimm admitted afterwards that the 1st half simply wasn’t good enough and the players were told that at half time. “We stepped it up second half and I thought we were much improved. If D’Sean’s effort goes in suddenly you’ve got a different game. If we weren’t creating those chances I’d be worried.”