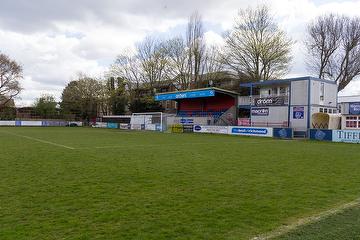 Can The Angels trap the Beavers?

There are only two teams below Tonbridge in the current Vanarama National South Table and one of those is the Angels opponents on Saturday 28th September, Hampton & Richmond Borough.  So perhaps the match could be described as a ‘six pointer’ but bearing in mind it’s still September, just, it’s maybe a little too early for that kind of description.

Nevertheless the two respective managers, ex Hendon boss Gary McCann for the Beavers, and our own Steve McKimm will both recognise that points do need to be put on the board and quickly to avoid being cut adrift.  Certainly neither will be panicking at this stage and no doubt have their plans as to how they might strengthen their respective squads.  Certainly McKimm in his post match interview following the disappointing exit to Eastbourne Borough in the F.A. cup last Saturday hinted that reinforcements could be on the way and certainly if results failed to improve.  At the time of writing however there is no news of any new arrivals at the Halcyon Wealth Longmead Stadium so it looks like the current squad that won promotion last May is once again going to be sent out to prove their worth at National South Level.

The Steve McKimm era has seen four meetings with the Beavers.  His first season in charge saw the Angels complete an unlikely double bearing in mind their eventual final position of just one place above the drop zone.  On Saturday 24th October 2014 at Longmead a 2-0 win was achieved courtesy of a Billy Medlock brace, while on Saturday 27th February Laurence Ball scored in the 28th minute to secure a vital three points.

The following season, a fine campaign for Hampton that  was to see them promoted as champions to Conference South, the Angels managed to secure an away draw 2-2 by virtue of goals from Tom Parkinson and a last gasp Nathan Elder (who else?) strike,  while at Longmead in the return match, Luke Blewden made sure the points stayed in Kent with a 64th minute penalty.

It’s impossible to reliably predict the outcome of this fixture, but it’s likely there will be plenty of ooohs and aaahs from the spectators as both sides attempt to gain at least a temporary advantage in the National South Table.