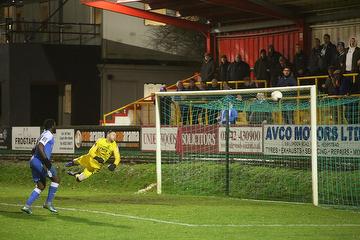 Patched up Angels give Tudors a fright

Angels Boss, Steve McKimm refused to be downbeat after the game despite the fact he had seen his side concede a stoppage time equaliser that denied the Kent side two precious points in their quest to climb away from the lower reaches of National South.

“I’m proud of the performance the boys gave today against a side full of experience. I know people will say we haven’t won away from home yet this season, but I don’t want our players to get hung up on that, the fact is we are picking up points away from home and whether that comes through draws or wins the points will stack up.  I’m sure the majority of our supporters ,who I must say were again fantastic today, will have left very pleased with what they have seen from their team.”

Not for the first time this campaign, McKimm was forced to re-calibrate his squad to take account of injuries.  Although Jack Parter was able to resume normal duties at left back the absence of Christ Tiehi meant that Alex Bentley was moved to the holding midfield position while Jason Williams became the lone striker replacing the injured Tom Derry.  Jarrod Small took over right wing duties from Khale Da Costa who was another on the injured list.  The unwell Harry Donovan although named on the bench was only able to participate in the final moments of the game.  To sum up the bench consisted of one substitute goalkeeper Ted McDonald, one new signee Jayden Antwi-Nyame, an unwell Donovan and the injured Da Costa.

Despite this, the Angels went toe to toe with a high riding Hemel Hempstead and came within a minute of nicking all the points which given the circumstances would have been some achievement.

Not surprisingly The Tudors made most of the running during the early stages with Craig Bramham-Barrett particularly prominent down the left flank with Jake Howells pulling the strings in midfield.  The Angels defence was forced to keep their concentration but led by skipper Sonny Miles with Alex Bentley doing some sterling work just in front of the back line. The times that Hemel Hempstead did manage to pierce the Tonbridge rearguard, they found keeper Jonny Henly in excellent form with top drawer saves in the 35th and 44th Minutes.

There were few moments forTonbridge up front despite the unselfish work from striker Jason Williams. In the 34th minute Jarrod Small made a searing run down the right flank and turned along the bye line but his short cross was somehow cut out by a Hemel Hempstead defender for a corner.

The second period saw an improvement in the game with a more open style of play from both sides and from Angels in particular who gave notice that they were not simply there to make up the numbers. In the very first minute of the second half a piece of miss communication between a Hemel Hempstead defender and the goalkeeper let in Small but the winger’s angle was too tight and the shot hit the side netting.

The hosts thought they had scored in the 49th minute but the whistle had gone for a foul.  They did however force another good save from Henly a minute later.

On 53 minutes, Williams saw his shot blocked on the line after good work from D’Sean Theobalds and Joe Turner and you sensed that Angels were starting to believe they could get something from the game.  Just a minute later Jack Parter put through Turner, the winger made the space for the shot  but it lacked genuine power. It was however simply a prelude to what was to follow when in the 70th minute again fed by Parter the winger hit an unstoppable piledriver into the top right hand corner of the Tudors net.

Inevitably there was to be a response from Hemel Hempstead and it needed a saving tackle from Bentley in the 83rd minute.   However it was to be Tonbridge who were creating the clearer chances with a couple of efforts inches wide from Greenhalgh and a shot from Theobalds

As the game entered stoppage time it seemed as if the Angels would be celebrating that first away win but in a mad couple of minutes with goalkeeper Sam Beasant going up for the final set piece somehow Niko Muir forced the ball over the line despite Henly claiming he was held.  In truth it was difficult for the referee to see through all the many players in the goal area.