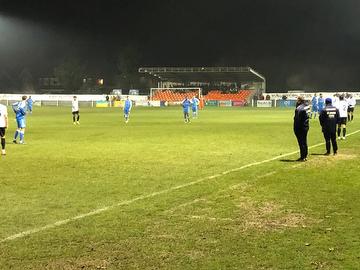 Angels drop back into relegation zone

The sight of Angels Boss, Steve McKimm coming straight over to the away supporters at the final whistle and apologizing to everyone individually for an inept performance by his side tells you everything you need to know about this game.

A very ordinary first half performance with the home side having the advantage of the slope saw the Angels protecting their goal reasonably well and restricting the Crusaders to only one really decent chance. That came at in the 43rd minute when Tonbridge keeper Jonny Henly flapped at a cross coming in but redeemed himself at the second attempt as Marcus Johnson-Schuster couldn't quite get enough on the ball to force it home.

For Tonbridge, a mistake on the Hungerford back line let in Jason Williams on 17 minutes but defenders recovered quickly, he was driven wide and the chance was gone.  A minute later a good interception by Christ Tiehi and with a penetrating run the shot was on target but fairly easy for Josh Bradley-Hurst.  On the half hour mark Joe Turner was able to cut in from the left wing and although he managed to create some space the resultant effort was well wide.

With honours even at the break and the slope in their favour, Angels supporters as they warmed their hands over a warm cup of tea on a cold night in West Berkshire were looking forward to the team taking the game to their hosts for those precious three points that would have put them above Dulwich Hamlet.  Instead they were forced to watch a most inept display as Hungerford Town showed far more enterprise making light work of the slope.  Only Henly who made two or three crucial saves to keep the scoreline respectable and midfield substitute Harry Donovan could come out with any genuine honours, as the men in blue simply failed to impose themselves on the game at virtually any stage during that second period.

There was just one passage of play as the match was nearing its end when the Angels suddenly realized things were slipping away from them.  A decent run by substitute Khale Da Costa and with help from Donovan the ball was cut back to Ben Greenhalgh in a perfect unmarked position in front of goal. The shot came in on target but a desperate defenders leg got in the way and the ball went out for the corner.  There were to be no more scares for Hungerford as they saw out the remaining few minutes in relative comfort.

As far as the winning goal was concerned a somewhat innocuous cross from the Hungerford left was simply not dealt with by any Angels defenders and with it marking also went out of the window.  Up stole Johnson-Schuster with the freedom of the park at his disposal to place a well struck shot past Henly in the 61st minute.

It was to be a long and downbeat coach ride back to West Kent.