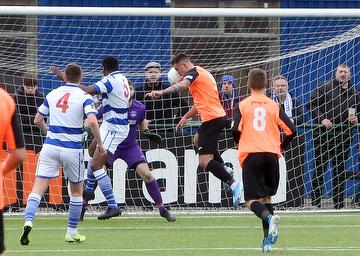 Wood you believe it ! Tommy debuts with brace

Signed by The Angels just 24 hours earlier from AFC Wimbledon, on loan striker Tommy Wood lit up a rather gloomy and windy Marsh Lane with two strikes and winning a penalty to dispatch mid table Oxford City.  Wood of course played a huge part in this win by combining well with fellow striker Jason Williams  but this was very much a team performance with defenders concentrating when required and midfield constantly pressing the Hoops.

Angels supporters who had before today seen their team win only once on the road this campaign must have wondered why there was such a big change in fortune between Monday’s somewhat feeble capitulation at Chelmsford City and today’s emphatic victory.

It was the flanks that brought much profit for the visitors with the host’s full backs unable to cope with the pace and trickery of Ben Greenhalgh and Joe Turner with Alex Bentley and James Folkes always available for the overlap.  It was this route that brought the opener for Tonbridge in the 15th minute with Wood getting his head to the ball with a deft touch past Oxford City keeper Craig King.

The remainder of the half despite playing against the wind saw the visitors largely in control with chances falling to Williams and Wood. On 23 minutes there was a strong appeal for a City penalty but waved away by the referee and three minutes later there was an effort from Nico Jones for the home side dealt with by keeper Henly but the Angels were good value for their half time lead.

With the wind in their favour it was inevitable that Tonbridge would be able to continue to press for further goals.  To their credit the home side around the hour mark did try to make a game of it and for a while Angels found it difficult to get out of their own half.    But the Kent side played for each other and restricted Oxford to very few genuine chances.  That said on 77 minutes Henly pulled off a terrific save to keep the scoreline intact followed by the referee again turning down a home penalty appeal, this time booking an Oxford player for diving!

The second goal for the Angels that always seemed to be on eventually arrived in the 84th minute when a cross from substitute Da Costa was converted via a deflection by the impressive Wood and that was probably going to be enough for all the points to be going back round the M25.

But the away side were not finished yet.  That man Wood chased down a through ball, attempted to go round King but was brought down for his efforts with the referee immediately pointing to the spot.  Despite Wood winning the spot kick and on a hat trick, regular penalty taker Turner stepped up on 89 minutes and made absolutely no mistake with a shot that must have come close to breaking the net.

Afterwards, Angels Boss, Steve McKimm, said: The players followed our instructions to the letter. Of course it’s been a great start for Tommy Wood, he’s done really well, but this was a team performance that clicked. Joe taking the penalty ?  If he’s on the pitch he takes penalties, there’s no doubt or confusion, Tommy understood the situation.”