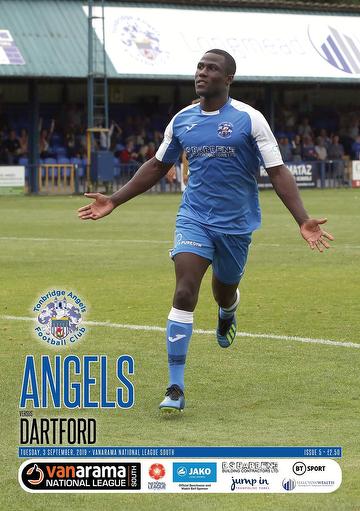 We welcome Dartford for a league game tonight for the first time in seven seasons.

This is Dartford's fifth year in National League South after relegation. In the five years since going down they've almost justified their tag as one of the favourites to go up, finishing third in 2017, and leading the table for much of 2018 before they lost out on the final day of the season to Havant, and lost the play-off semi final to Braintree.

After long serving manager Tony Burman "moved upstairs" at Princes Park, Adam Flanagan and Angels academy coach Jamie Coyle took over as joint managers in the summer of 2018. Last season they were still in play-off contention until the final day of the season but finished tenth, whereas this season they've had a tough start to the season and sit just one place above us in 20th place with seven points from eight games. They started the season with a 4-1 defeat at Wealdstone, who nobody suspected would be as good as they appear to be at that stage.

They then drew home games with St Albans and Havant and Waterlooville, lost at Chelmsford 4-0 in a game where they looked the better side in a goal-less first half but struggled to cope with the sending off of Jordan Wynter. They followed that with a 3-1 defeat at Weymouth, got their sole win of the season at home to Braintree over Bank Holiday weekend and have since drawn 2-2 at Hungerford and on Saturday drew 1-1 at home to Hemel Hempstead.

It could be following the loss of long-term influential midfielder Elliot Bradbrook they have struggled to gel, but the last three games suggest their recovery is starting and there appears to be no doubt they will finish much higher than their current league position. The top scorer at present with three goals is Norman Wabo, a player with frightening pace and ability in some games and looks less involved in others. Highly rated in the Southend youth set up, he spent time with Ebbsfleet and Maidstone before finding a permanent home at Princes Park. Wabo has tended to come off the bench of late, but another player up front to watch is Adam Cunnington, a player any other striker would love to play alongside. Adam wins the aerial balls and is a regular contributor with goals as well. Cunnington has league experience with Dagenham and Cambridge, and last season was with Bromley and Billericay.

His strike partner in the last three games as been ex-Ebbsfleet man Darren McQueen following his return from injury, while Charlie Sheringham, son of Teddy, also tends to be on the bench. There's a former Angel in the centre of midfield for Dartford, Luke Allen. Luke started 60 games for Tonbridge between 2015 and 2017, was part of our play-off campaign which ended at East Thurrock in 2016. Since leaving us Allen has played for Braintree, and was in the Irons team who beat Dartford in the play-offs in 2018, and is very much one to watch at this level.

Allen's central midfield partner is likely to be Lee Noble. Now in his twelfth season at Dartford, he scored the goal that got the Darts promoted to the national league in 2012. Wide options are plenty for Dartford. Luke Wanadio returned to the club in the summer after two years away, former Maidstone and Margate player Alex Flisher has started the last three games. He has in his armoury amongst other things an effective long throw. In his second season at Princes is Ben Greenhalgh, whose former clubs include Inter Milan as the result of a successful participation in a reality show, and Ryan Hayes is a left footed right midfielder who made his debut for the club in 2005.

In central defence will be two of long serving Ronnie Vint, ex Ebbsfleet man Tom Bonner or Josh Hill, one of whom could be moved to full-back, while Wynter returns from suspension and competes with Southend loanee Rob Howard for a place at right-back. Finally, in goal is Mark Smith who joined in the summer from Billericay.

Dartford now have a settled existence after they moved back to the town in 2006 having played at borrowed grounds around the south east since leaving Watling Street in 1992. Dartford have won their last eight games in all competitions against Tonbridge dating back to 2009. Our most recent meeting saw Darford win an FA Cup fourth qualifying round tie here 3-0 in 2016, and our last victory against Dartford came in the Isthmian Premier Division in 2008 when a Carl Rook hat-trick helped us to a 4-1 victory.

This is the 129th meeting between the sides, Dartford have 67 wins to our 37. Just 68 of those previous meetings were league games as since our first meeting in the southern league in 1948 we've also met in nearly every competition we've ever entered. We've me in the FA Cup, the FA Trophy, the Southern League Cup, the Isthmian League Cup, the Kent Senior Cup, the Kent Senior Shield, the Kent Floodlit Cup and the Eastern Floodlit Cup, as well as the southern league, the Isthmian league and our two previous meetings in this division.