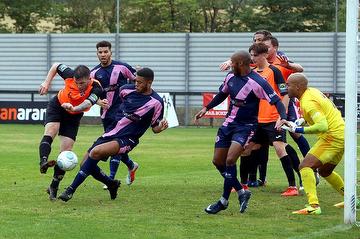 We're pleased to welcome Dulwich Hamlet as our opponents for our first step two game here at The Halcyon Wealth Longmead Stadium since the 26th of April 2014. In Dulwich we see not only one of the best supported clubs in our new division, but also a familiar one as we have met on a number of occasions since we dropped down into the Isthmian league.

We've played each other ten times since we met in the middle in the summer of 2014, eight league games in Isthmian premier, a league cup semi final, which we won 3-1, and our last meeting, a controversial FA Cup tie last season when we went out 3-1 at Dulwich's temporary home of Tooting and Mitcham having controversially conceded a goal and had James Folkes sent off in first half stoppage time. Since that game Dulwich have returned to Champion Hill and all signs suggest their already impressive fan base will even be exceeded this season.

In the eight league meetings we have played in the past five years, we've won two, Dulwich have won two, and there were four draws. Both our wins agaisnt Dulwich in that time were away from home. Tom Parkinson and Alex Akrofi each scored in a 2-1 win at Champion Hill just before Christmas 2016, and we also won 2-1 in April 2018 in one of our best results of the season against a Dulwich side about to go up. Alex Akrofi and Sam Bantick both scored just before half-time for an Angels side down to the bare bones, so much so Steve McKimm was named as substitute.

The last four league games between the sides here have all been draws. The last time there was a winner between these two clubs in a league game was in 2006 when a Nick Barnes penalty and a second half effort from Jay May, who went on to play for Dulwich, were the scorers in a 2-0 Angels win. Dulwich have never won here but they have won at the Angel Ground in the third qualifying round of the FA Trophy in November 1976. Ossie Bayram scored a hat-trick for Dulwich. Ian Hamilton and Ray Hales were our scorers.

Dulwich's pre-season has, like ours, been a busy one, with seven games. They've beaten Chester 2-1 and Marine 4-2, they've drawn with Bromley and a Tottenham XI and lost to Colchester, Sutton and a Crystal Palace XI. More than 1,000 attended the Palace game last week. Jeffrey Monakana gave Dulwich the lead with a 15th minute penalty, Christian Smith doubled the home side's lead eight minutes before half-time with a header, but Palace dominated the second half, winning 4-2.

Gavin Rose is now in his seventh season as Dulwich manager, which includes two promotions. As expected, Dulwich have recruited well in the summer. Something we are going to find this season is the strength in depth of our opponents, and looking at last week's team-sheet for the Palace game, there are going to be some very impressive players who can't get in the Dulwich starting eleven today.

Amongst the new recruits are David Ijaha who played in National South for us under Tommy Warrilow. The central midfielder joins from Welling United. Danny Mills is a striker who has played for Ebbsfleet, Dartford and Welling in recent years but for many years was prolific for Whitehawk in National South. He's one of this divisions most feared and consistent strikers and is certainly one to watch today, whilst fellow striker Adam Yusuff was playing up front for Folkestone and scoring more than a goal every other game, and new left-back Jack Connors has played National League top division football for Ebbsfleet and Dover

In the past week they have also added French centre-back Yannis Ambroisine from Welling, who's also featured for Entente SSG and Montreuil Red Star, before moving to England, while full-back Aaron Barnes, who's played first team football for Charlton, joined the club this week from Colchester.

Those are only the new players. You then have to contend with the players retained from last season. Midfielder Nyren Clunis is normally a player I thoroughly enjoy watching. A Dulwich mainstay having come through the youth set up, he's exciting, he's quick, he's got a drawer full of medals, and the only reason I probably won't enjoy the experience so much today is because he'll be in opposition. Dominic Vose has also decided to remain at Champion Hill, while Dipo Akinyemi, who signed on for another season this week, scored against us last season, and netted 17 times through the season.

Goalkeeper Preston Edwards, who's reached play-off finals of this division with Ebbsfleet United, returned to the division last season following Dulwich's promotion and is a consistent, experienced stopper. He's also in the record books for a red card after 12 seconds for Ebbsfleet against Farnborough, where our former player Tom Phipp, then a teenager, had to play the remaining 89 minutes and 48 seconds plus stoppage time in goal! Preston didn't start last Saturday's friendly. In fact he was in his normal clothes in the directors box when Charlie Grainger got injured so he had to run down to the dressing room and get changed to replace him.

Bookies are putting Dulwich around mid-table on with their title odds ranging from 16/1 to 20/1. They follow today's game with home matches against Wealdstone and St Albans with our visit to Champion Hill on the 29th of February.