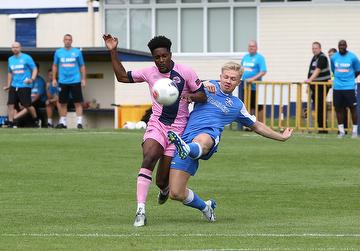 Angels need to get more streetwise

Dulwich Hamlet battled through to their first ever win at Tonbridge but in the end they had to work hard for it. The game produced two red cards and two penalties but it was hardly a dirty game. Tonbridge though will need to learn quickly at this level as Dulwich once ahead managed the game very well.

Ten minutes saw the first clear cut chances with D’Sean Theobalds for Tonbridge setting up Joe Turner but the winger’s effort was just wide of the left hand post. The home side had enjoyed slightly the better of the opening exchanges and it appeared to be getting better when Quade Taylor was shown a straight red card for bringing down Tommie Hession-Harris when through on goal.

With a man down it was however the visitors who took the lead when Jack Connors corner was converted with a downwards header by Hamlet skipper David Ijaha on 22 minutes.

On 36 minutes a significant incident occurred which may well have had a considerable bearing on the final result.  An attempted header back to his goalkeeper from James Folkes had Jonny Henly scrambling to  prevent the corner and whilst he succeeded in his aim he landed awkwardly on his shoulder and needed some treatment before being able to carry on.  Further work was carried out in the dressing room at half time and the Angels stopper appeared for the second period.

The game appeared to have been settled when on the hour mark the normally reliable Henly spilled a routine cross and with Danny Mills lurking to pounce on the loose ball the Angels keeper brought down the Dulwich striker, with a red card the inevitable result.  There is absolutely no doubt that the mistake came about due to that earlier shoulder injury.

James Folkes took the gloves and but his first action was to pick the ball out of his net as Dulwich converted the penalty through Jeffery Monakana on 62 minutes.

The home side were very much back in the game on 68 minutes when substitute Jared Small’s cross was met by Turner who was impeded and a penalty was awarded. Turner himself dispatched the spot kick successfully and with the home side going three at the back an equaliser seemed very possible.  Dulwich decided to shut up shop and whilst it was 10 v 10 with an outfield player in the home goal they decided to hold on to their slender advantage rather than make the game safe. The result was that play became largely confined to the away half as Angels turned the screw.   Chances did fall to Alex Bentley and substitute Chinedu McKenzie while the away woodwork was hit admittedly from an offside position, but Dulwich held on for the three points.

Afterwards, Angels Boss Steve McKimm said: “I was proud of my payers this afternoon. Everyone of them substitutes and all put in a terrific shift against a side that’s aiming for the playoffs.  James Folkes was in goal for around 30 minutes and didn’t have anything to do apart from a couple of backpasses which shows you how we controlled that period.”