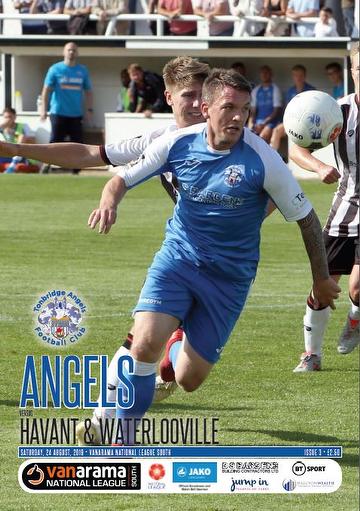 The Havant and Waterlooville side we come up against this weekend is largely a combination of some of last year's Sutton United side,  some of Ebbsfleet United's side from last season, and those who remained from last year, it means they nearly all played in the National League last season, no surprise then that the Hawks were one of the pre-season favourites for the title and they go into today's game unbeaten so far this season.

Havant were relegated last season in their first ever season in the top division of non-league football having won National League South in 2018, and winning the Ryman league title in 2017.

Taking over from Lee Bradbury as manager is Paul Doswell, a former work colleague of Steve McKimm at Sutton, and a number of the side we play today have come from Gander Green Lane, so we know it's going to be difficult.

Maybe the best known player in the Havant side is Nicky Bailey.  Now 35, he joined today's visitors in the summer after three years at Sutton, during which time he helped them win this league in 2016, but between 2008 and 2015 he played nearly 200 games in the championship for Charlton, Middlesbrough and Millwall.

Equally as experienced is another midfield player Simon Walton, whose previous clubs also include Sutton, but most recently was player-coach in Maidstone United's relegation season last year, however Walton has plenty of high level football league experience at the likes of Leeds, Cardiff, QPR and Hull.  He was once bought by Charlton for £1M but didn't make a first team appearance.

Nicky Bailey is one of a number of Havant players who were employed by Doswell at Gander Green Lane.  Also making the trip down to the south coast were keeper Ross Worner, defender Dean Beckwith, midfielders Josh Taylor and Roarie Deacon and striker Jonah Ayunga.

Worner, like Bailey, has played for Charlton, and featured in league football for Aldershot and AFC Wimbledon, and had been at Sutton for the last four years.  Beckwith, who had a short spell with us in the early noughties, was also in Sutton's promotion winning team in 2016, and previously played for Hereford, where he won promotion to the football league, Northampton Town and Gillingham.

Deacon has played league football for Stevenage and Crawley, and last year was playing Scottish Premiership football for Dundee.  He also won the man of the match award in Sutton's FA Cup win over Leeds United in 2017 while Taylor, an England C international, spent last season on loan at Maidstone United.

Ayunga is Havant's leading scorer so far this season with five goals.  The 21 year old Kenyan isn't new to West Leigh Park.  He spent three months on loan there from Sutton last season before heading back to Gander Green Lane where he broke into the first team.

Sutton also have three of last year's Ebbsfleet United squad.  Defender Sam Magri as played full international football against England for Malta, qualifying through his grandfather.  Before Ebbsfleet he played for Dover and can operate at either full-back or in the centre of defence.   Andy Drury was a Fleet team-mate of Magri's last season.  Drury started out at Sittingbourne in 2001, moved to Gravesend and Northfleet, as they were then, and to Lewes where he attracted the interest of football league Stevenage.  The third ex Ebbsfleet player to sign for Havant in the summer is also a former Angel.  Danny Kedwell started seven games in season 2002/3, but since then he's scored the winning penalty to send AFC Wimbledon into the football league at the Etihad Stadium, become a crowd favourite at his local side Gillingham, where he scored the promotion securing goal against Torquay United, and has spent the last four years at Ebbsfleet.

Other Havant players include Alfie Rutherford, now in his fourth season having signed in 2016 from Bognor Regis Town, who is renowned for changing games late on, midfielder Wes Fogden, who was part of the Havant side to win back to back promotions, and full-back Anthony Straker, who has played for Aldershot, Wycombe and Southend, as well as the Barbados national team.

Football in Havant goes back to 1883 when Havant FC joined the Portsmouth league, but the name of Havant and Waterlooville has only been on the football map since 1998 when Havant Town merged with another southern league side Waterlooville.  Havant and Waterlooville won promotion from the Southern League Southern Division at the first attempt and had the best season in their history in 2018 when having won the then Ryman league title they won National League South, overtaking Dartford in the final week of the season, to go up to the National League for one year.

This season Havant and Waterlooville's best result has been a 6-0 thrashing of Dorking Wanderers.  They've also come from behind to win 4-3 at Hampton and have drawn with Welling, Dartford and Chelmsford.

We've only won two of the ten previous meetings with Havant and Waterlooville, in January and August 2013.  In 2012/13 a first half Frannie Collin penalty gave us a 1-0 win, while the following season Luke Blewden and an Ed Harris own goal saw us win 2-1 away win.  In our last meeting, in April 2017, we lost 2-0 and ended the game with Ugo Udoji in goal after Jonny Henly was sent off (and rescinded).

Against Waterlooville we won 10 of our 34 meetings, drawing eight and losing 16, whilst we played Havant Town ten times, winning just two.