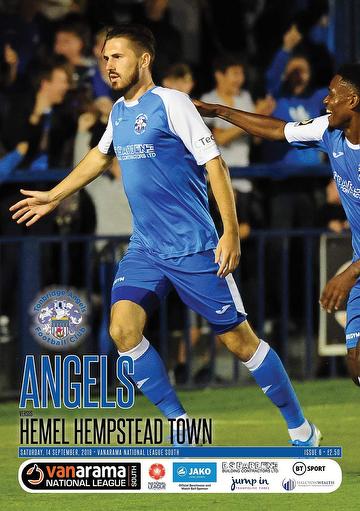 One of the nice things about gaining promotion to a new league is the new opponents we face, and for the first time this season we welcome a team who've never been to Longmead before.

Hemel Hempstead Town came up to National League South in 2014, the year we were relegated, so we missed each other, but they've been steady participants in their five years in the division so far, reaching the play-offs two seasons ago, losing to Braintree in the last six.

Hemel Hempstead have made an impressive start to the season.  They sit in third place with six wins, one draw and three defeats.  Their two away wins were at Hampton and Richmond, and Oxford City.  Their have three joint scorers, Liam Nash, Sam Ashford and Ricky German, who've all scored four.

However the name that perhaps stands out in the Hemel Hempstead strike force is Jack Midson.  36 years old this week, Midson is player-coach at Vauxhall Road, has played in the football league for AFC Wimbledon and Barnet and regularly scores the best part of 20 goals a season.

They have plenty of names familiar with those who follow football here in Kent.  Alex Wall is a forward who has played for Bromley, Luke Howell, went to Tunbridge Wells grammar, started his career at Gillingham and last season played national league football for Aldershot, skipper Connor Essam played at the back for Gillingham and for many years at Dover before leaving when the club pushed up to full-time, Mitchell Dickenson was on the books at Gillingham and joined Hemel from Hythe, plus they also have two defenders who have been away on international duty this season, Tyrone Sterling for Grenada and Craig Braham-Barrett for Montserrat.

Turnstiles open at 1:00pm so come and enjoy a pint of real ale in the Longmead Lounge or have a browse round the Club Shop,  Credit/debit cards accepted up until 3;00pm at the gates and also in all bars and refreshment outlets.