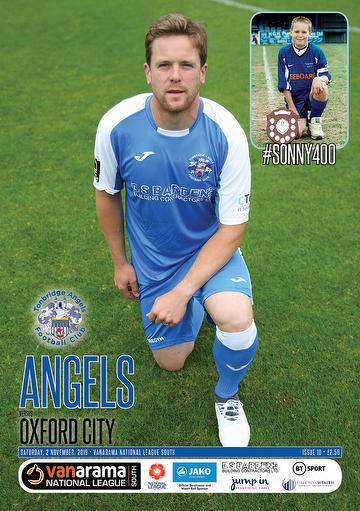 Despite heavy rain this morning, we are pleased to announce that today’s game is definitely ON.

It has been said that the three successive fixtures starting with the home match against Oxford City and carrying on with Hungerford Town (away) and St Albans City (Home) may well define the Angels season.  That’s probably not going to be the case but what is clear is that McKimm’s men need to start picking up points and quickly.  It’s OK and probably true to say that every team encountered has been given a testing game and no one has yet ‘rolled us over’, but the fact is points need to be put on the board and the squad needs to develop that winning habit instead of losing bravely.

Whilst the team chosen by Steve McKimm is likely to include players that have achieved career milestones in their time at Longmead for example Sonny Miles should reach his 400th appearance, as much interest will be around a player who should be making his Angels debut, Jason Williams.  The striker signed last weekend from Isthmian Div 1 Brentwood Town has National South experience and is obviously keen to be playing at this level once more.  McKimm will certainly be hoping that the addition of a third striker will help the forwards fashion more goals, a vital factor if his team is to push up the table.

Oxford City were the original football club in Oxford, being founded nine years before Oxford United, who are currently in league one.  They were founded in 1884, joined by Headington United in 1893, the latter becoming the side we now know as Oxford United.  However football in the city dates back further than that with the university's football club dating back to the 1870s, and they indeed won the FA Cup ten years before Oxford City was even founded.

In the early part of the 20th century, Oxford City were one of the top non league clubs in terms of FA Cup success, reaching the last 32, equivalent to the fourth round proper, in 1902, and winning the FA Amateur cup in 1906, beating Bishop Auckland 3-0 in the final in a snow storm.

The club continued playing during the second world war, producing a number of players who would go on to be full time professionals, although the club itself then struggled for results and almost lost their Isthmian league status in the 1950s, but the 1960s saw an improvement, reaching the FA Cup first round five years running, reaching the quarter final of the FA Amateur cup, and winning the Oxfordshire Senior Cup.  In 1988 they were evicted from their ground, which they had played at since the year 1900, but recovered to win promotion through the Isthmian Leagues and in 2012 they won promotion to step two for the first time in their history.  This wasn't National League South though, this was National League North, so it involved several long trips.  A few years later geography helped them and they were switched to National League South, where they have been ever since, finishing 12th last season.

This season started with something of a struggle for The Hoops.  The first two and a half months of the season saw them win just two league games, at home to Hampton and away to Bath in August, although they have had success in the FA Cup where wins over North Leigh, Hampton and Richmond and Margate have given them a place in the first round proper next weekend against Solihull Moors. This isn't unfamiliar territory for Oxford City as two years ago they reached the first round and for the first time in their history they beat league opposition, knocking out Colchester United.

Ominously for the Angels their league form seems to have suddenly picked up with wins against Slough Town at home 2-1 and away at Dorking Wanderers on Tuesday 2-0.   Their improved league form appears to have coincided with a change in management that saw the departure of Mark Jones and interim appointments made.

This is our first ever league game against Oxford City, but it's not our first meeting.  We were drawn together in the FA Trophy in 2004, with the Angels coming out on top after a replay.  In the original tie here at Longmead we drew 1-1 here.  Gareth McLeary gave Oxford a 27th minute lead but Brendan Cass levelled for us seven minutes later.   Cass would then turn out to be the hero of the replay the following Tuesday, scoring a hat-trick in a 4-2 win after Danny Lye had given us a third minute lead.

We welcome and thank Gary Cornwell and all at Lewis & Co  https://www.lewisandco.biz/ tax advisers based in Tunbridge Wells as our match sponsors and hope they enjoy their afternoon with us.