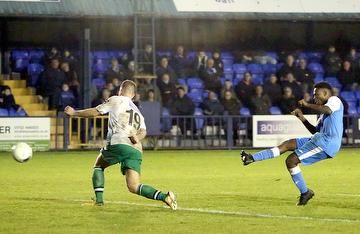 Da Costaaaa brews up a storm

Angels deservedly took all the points in this bottom of the table clash as over the 90 minutes they created more chances.  A late goal from the visitors had the home supporters anxiously looking at their watches but the hosts were not to be denied and saw the win take them off the foot of the table.

Ex Saints man Khale Da Costa was causing all sorts of problems for the visitors on the left flank early on and it was his cross in the 5th minute that Tom Derry might and should have put away. The enterprising Derry with his aerial ability and good running off the ball was also stretching the St Albans defence.

In the 29th minute a free kick was awarded to Tonbridge just outside the area and new loanee signing Ben Greenhalgh made no mistake with the ball ending up in the top right hand corner of the net, Dean Snedker in the St Albans goal hardly moving.

From the kick off St Albans Oliver Sprague nearly equalised but Angels keeper Jonny Henly was equal to the task.  The half ended with the visitors starting to assert themselves but to no avail.

The second half continued to see Tonbridge edging proceedings but they couldn’t quite put the game to bed. Eventually that man Da Costa doubled the home side’s advantage in the 77th minute following good work from substitute Jason Williams.

With the game seemingly safe, Tonbridge were cruising but Zane Benton gave the visitors hope on 89 minutes to set up an exciting end. In truth it was the home side who should have gone further ahead with Joe Turner missing a glorious chance in stoppage time.

Whilst Da Costa arguably may have been the pick of the Angels players, this was very much a team effort with Christ Tiehi and Ben Greenhalgh making significant contributions to an important victory.  Manager, Steve McKimm said afterwards :”That was easily Christ’s best game since he came here”.