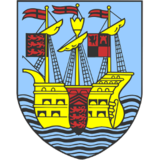 We welcome another one of the league's promoted clubs this Saturday 31st August as Weymouth joined the league in the summer from the Evo-Stik League Southern Premier South.

Weymouth went up as champions last season and play at step two for the first time since the 2009-10 season. Their spell in the league on that occasion was just one season as they dropped from the National League and were relegated into the southern league the first year down. However Weymouth have an impressive history in non-league football. They were founder members of the Alliance Premier Division (now the National League), finishing second behind Altrincham in the first season, and remaining in the league for its first ten seasons, six of them top ten finishes.

Weymouth were founded in 1890, playing their first fixture in September of that year against Mr Pope's XI, but their first involvement in any form of league football came in 1896 when they were founder members of the Dorset league. They entered the southern league in 1949, they also twice applied to become members of the football league in the 1960s and 1970s however there was no promotion or relegation then, new teams were decided by votes and as was the case with many non league teams they were unsuccessful.

They've twice played a European Champion in the FA Cup. In 1949 they drew Manchester United in the third round and lost 4-0 at Old Trafford, and more recently they faced Nottingham Forest, then a league one club. But they weren't the club's best runs. In the early 60s they reached the fourth round and played Preston. In fact their name appeared in the fifth round draw as the match was abandoned so they were an either-or in the following Monday's draw.

In 1987, after nearly 100 years they said goodbye to the Recreation Ground and moved into the Wessex Stadium (The Bob Lucas Stadium) where they play today.

Their former managers include Garry Hill, John Hollins, Bobby Gould, Neil Webb and Steve Claridge and Weymouth are managed today by Mark Molesley, who has been in charge since April 2017.

They sit sixth with three wins, two draws and two defeats in their first seven games. They started the season with a 2-1 win at Maidstone, have beaten Chelmsford and Dartford, drew at home to Bath and away to Slough and suffered their first two defeats of the season last weekend at Chippenham, and on Bank Holiday Monday when they lost an entertaining game 4-3 at home to leaders Wealdstone. They came from 3-1 down to get back to 3-3 before conceding a late winner from Wealdstone's Ross Lafayette, his third of three in the match.

Their goals have been spread out a bit. Josh McQuoid, Ben Thomson, Brett Williams and Abdulai Baggie have all scored three goals. McQuoid is a Northern Ireland international striker who is also club captain. His three goals all came in the same match against Chelmsford. He's also played for Bournemouth, Millwall, Luton and Aldershot.

Brett Williams joined in the summer having also represented Forest Green, Torquay and Aldershot while Thomson is in his fifth season at the Wessex Stadium, is described as a no-nonsense and physical striker who is a fan's favourite at the club. However Thomson and McQuoid both missed Saturday's game at Chippenham through hamstring injuries.

Baggie has played full international football for Sierra Leone and joined the club in 2017 from Poole Town, his midfield team-mates include Jake McCarthy, who had a spell with Maidstone last season, Andy Robinson, who joined in the summer from Havant, Yemi Odubade, a 35 year old whose previous club was Eastbourne Borough, and Jordan Ngalo, only 20, but has played for England schoolboys.

At the back for Weymouth, Calvin Brooks, a central defender who has also featured for Yeovil and Dorchester, former Bournemouth academy graduate Ollie Harfield, Stephane Zubar, a French centre half who's played in France, Belgium and Romania and in his second spell at the Terras having moved from Yeovil in 2017, and Sam Sherring, who is on loan from Bournemouth, Behind them all is Weymouth keeper Calum Ward, who is just 18 years old and is also on loan for the season from Bournemouth.

Weymouth used to be regular opponents of ours in the southern league but since we became an Isthmian league club we haven't met. Our last meeting was 21 years ago in the southern league when Weymouth won 4-2 in April 1998. It was so long ago one of the scorers that day has seen another generation of his family represent the club and retire! Steve Lovell got our first with Matt Broadway adding the second, but Weymouth came out on top through Laws(2), Hutchinson and Robinson.

This is the 48th meeting between the sides, all but one of the previous 47 were in the southern league, the one exception was in the first qualifying round of the FA Trophy in 1995. We've won 14 times, lost 22 and drawn 11. Weymouth have won on their last three visits and lost just once here when Steve Campfield and an own goal saw us come out on top 2-0 in March 1994. However mention goes to Tonbridge striker Jimmy Constantine who scored twice on two separate occasions against Weymouth, and once scored four in the same game against them in the 1950s.