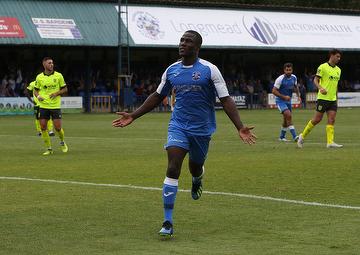 Angels and Terras all square

The Angels faithful may have had to wait 21years to see the side from Dorset take on their heroes but a much better performance ensued compared with that game in April 1998 when a 2-4 home defeat was suffered.  It may only have been a modest 1-1 draw today but the performance at times gritty, at other times skilful will have given hope for the future in what is turning out to be a highly competitive National South season.

Angels manager Steve McKimm chose to move Joe Turner into a central midfield role starting both his other side players Jared Small and Khale Da Costa.  The latter returned the compliment to his manager by having probably his best game so far this season although to be fair he has been carrying a niggling injury.  Another player who perhaps has come of age in an Angels shirt was Rian Bray who had a very steady game at the back partnered by his mentor, Sonny Miles.

It was a very even first half and with both sides coming off the back of successive defeats and perhaps a safety first approach was the order of the day for both managers.

There was plenty of decent possession play in midfield areas and some speculative shots but arguably only two moments when either side was opened up. In the 18th minute Yemi Odubade for Weymouth escaped his marker and was able to cut in from the right with a clear sight of goal. Angels stopper Jon Henly however was equal to the task pushing away the effort.

The 44th minute saw Angels playmaker D’Sean Theobalds run from deep in his own half and then slipping the ball wide to Joe Turner whose curler was just clear of the angle of post and bar.

The second period was just three minutes old when Weymouth’s Odubade crossed from the right with a perfect cross for Brett Williams to put the Terras in front.

There followed an immediate response from Tonbridge with efforts from Rian Bray and Joe Turner before Angels were awarded a hotly disputed penalty in the 59th minute. The referee had taken a while to deal with the Weymouth complaints and there was a significant delay to the taking of the penalty.  There was also a debate around who should take the penalty with both Turner and Ade Yusuff seeking to claim the ball.  The bench ruled that Turner as the regular penalty taker should continue as normal.  Turner’s kick was brilliantly saved by Callum Ward but the arguments continued in front of the dugouts with order eventually restored following a couple of bookings.

Angels were awarded a second penalty in the 85th minute when D’Sean Theobalds shot was handled but this time it was to be Ade Yusuff to have the chance.  His effort hit the back of the net but the referee ruled there had been some encroachment and he had to take the spot kick again. Once again his effort hit the back of the net and Angels were deservedly Level. There were chances for both sides to grab the winner but Tonbridge looked the more dangerous.

Afterwards, McKimm said: “I’m very pleased with the performance, we passed the ball much better today, and cut out the errors. Perhaps I’m a little disappointed we didnt take all the points but all the players did really well and once again have shown we can compete at this level.